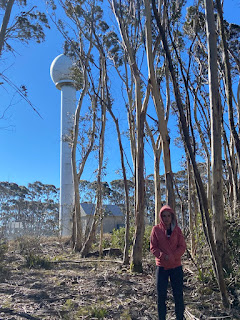 A high peak capped by exposed basalts on weathered bedrock draining into gullies filling with alluvial sediments and highland bogs. It is covered by a forest of gums (silvertop ash, brown barrel, peppermint/mountain/manna gums) of generally uniform age, suggesting significant logging or fire in recent time (I have found a 2013 harvest plan for a nearby compartment - cycling through a silvicultural cycle* of about 30 years - *a non-free-fell technique developed around selective native tree felling developed in East Gippsland). 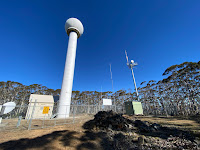 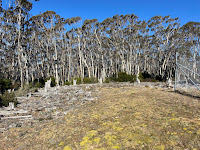 The peak has a couple of interesting features - including weathered rock, a lean-too structure and ancient cut timber. 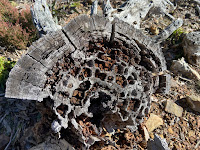 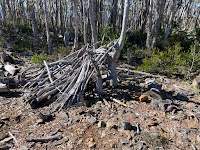 The name of the mountain is one of those that takes a little while to get used to saying. It is also one of those mountains you can drive to the top of, although a 4WD is recommended. The peak top was cleared in 2003 for a 22m tower which houses the regional weather radar (BOM Canberra Weather Radar - satellite operated), sporting a warning about non-ionizing radiation it uses to detect rain and wind (it is served by an underground power cable). Views from the summit itself are obscured by a forest of gums. 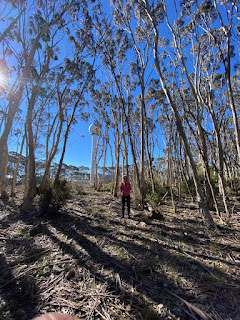 The last part of the track up to the tower can be hiked with ease. The fire trail to the peak has been in fairly good condition when we have travelled it over the past 5 or so years - which is more than can be said for the official trig marker. The cairn is in poor condition, and the trig marker itself (a black disk/disks on a metal leg) seems to have disappeared sometime before 2018. 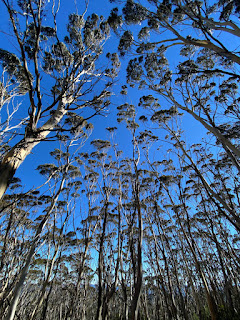 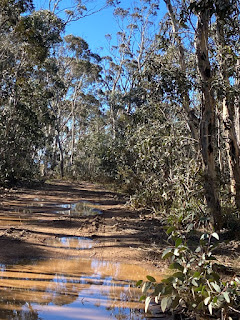 The location is given on Gaia in the form of a tiny walk around the tower.