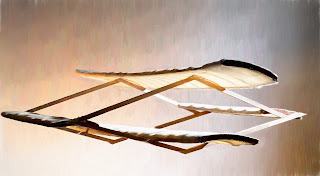 On 12 November 1894 an Australian girl became the first person in the modern era to fly using rigid, heavy than air, aerofoils. Attached to a tandem of box-like aerofoils the Australian engineer, Lawrence Hargrave had designed and built, she rose 16’ (5m) into the air. Her name is unrecorded.

I enjoy building his kites but am yet to persuade someone to try them out.

I do not want to enter into the debate about who should be remembered as the first to fly: my purpose is a little different.

Many of those involved in the scramble to develop a stable dependable aircraft appreciated the intellectual value of their work and protected their discoveries behind walls of patents.

Hargraves took a different approach. He made his discoveries public – publishing them in scientific journals deliberately with the aim of encouraging scientific endeavor.

"Workers must root out the idea by keeping the results of their labors to themselves a fortune will be assured to them. Patent fees are much wasted money. The flying machine of the future will not be born fully fledged and capable of a flight for 1000 miles or so. Like everything else it must be evolved gradually. The first difficulty is to get a thing that will fly at all. When this is made, a full description should be published as an aid to others. Excellence of design and workmanship will always defy competition.”

As a result of this approach, his designs formed the basis of most early stable box-kite designed aircraft – including those that first flew in America, as well as the beautiful powered box-kite built and flown by the Victorian farmer John Duigan. (The kite illustrated is the design chosen by Duigan.)

Hargrave’s son was killed at Gallipoli in 1915. Lawrence Hargrave is said to have never recovered from this loss, dying of complications after an appendix operation a couple of months later.

NSW government incompetence led to the loss of Hargrave’s actual aircraft. More recently, the Commonwealth Government commissioned the building of a number of full scale replicas of the kites for public display in Canberra. The replicas have been missing for many years.

Today, quietly in the backrooms of government, deals are being done with vaccine patent owners benefiting a handful, while in the real world thousands will die.