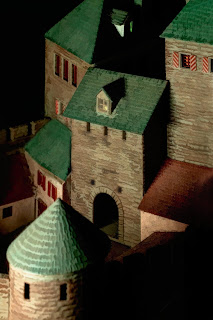 In 1348 the Black Death came to the city of Florence. At first health authorities cautioned lock down and restraint but within a short time, 150,000 of her inhabitants were dead and civil authority was destroyed.

Some faced the plague with caution, thinking isolation and austerity the best protection. Others treated it a joke and chose to approach each day as though it was their last, embracing every excess regardless of the morrow. Others fled, some taking the plague with them.

In this chaos, 7 women and 3 male friends, in a spirit of brotherly and sisterly friendship, left Florence and spent fourteen days in a rural villa away from the horrors of the age. Perhaps, selfishly, they spent their time walking in the gardens of the place, swimming in the glades nearby and enjoying meals together.

Each of the companions told stories of how the nominally pious used power to steal from those who trusted them, how the star-crossed are hellbent on pleasure, how pleasure is fleeting and death permanent, and how marriage can become captivity.

At the end of their time together the ten friends left their sanctuary and disappeared back into the plague-gripped city.

On their final night together, Fiametta sang a mournful song, saying that if love could come unmixed with jealousy, none would be merrier than her.

She sang of her taking a man and the forever war that followed. While she would desire her lover's good faith more than anything, the ways of man cannot be trusted and the wiles of women that allure cannot be ignored.

Fiametta song of jealousy praised the prowess of those others, practiced in wisdom, fair conduct and perfection of speech - all wrapped up as a risk to her own position - a risk multiplied by her personal enemy, time.

Instead of enjoying love, she was constantly troubled by jealousy, fearing the worse and trembling in dismay. For Fiametta, love was a battlefield, her life reduced to identifying and neutralizing the competition, in what ever way she could.

Fiametta finished her song. In the silence, one of the women’s male companions, Dioneo laughed and suggested she tell more to the other women present so they did not incur her anger.

But Fiametta looked into the eyes of the other women around her and chose silence.

Notes
Giovanni Boccaccio, a Florentine, escaped a career in banking and law to become devoted to literature. His Decameron (with its faint echoes of Apuleius) written on the edge of the Renaissance, pricks the pretense of the world around us, giving sharp insights into reality.
Return to Love (Short Story Series) INDEX
Labels: Love Series Short Story