Love #42, For What is Love But Madness After All 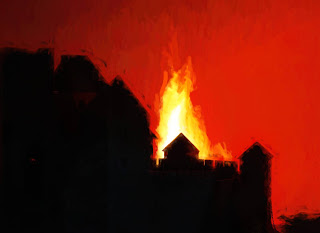 Take care: Love's snare fashions cunning meshes that will close round your wings.

Ludovico Ariosto had the Paris of Charlemagne burning in his head as he wrote his epic poem about the paladin Orlando 800 years before. It was raining the day Claude Debussy died, as the Germans bombarded Paris 300 years later.

The siege of the Paris of Charlemagne had a dramatic and bloody ending, with a leader of the invasion lifeless in a nearby forest.  A young Arab shepherd, Medoro, left to find the leader's body but was cruelly beaten and left him for dead as well.

After repulsing the invading Saracens, Charlemagne's paladin Orlando called loudly for his woman, the pagan princess Angelica. She was out of town, wandering her own paths, sure that no man deserved her love. Fate brought her to Medoro, losing blood, and she touches him and checks his pulse.

In the great forest, where night has thankfully hidden the sight of thousands of the dead, she applies herbs and brings him back to life.

The touch of her hand on his body melts her heart and together, they escape back to far Cathay to take her place as ruler of the East.

But first, as Paris burns in the far distance, Angelica and Medoro pause in an enchanted grotto. They make love tenderly, again and again, writing each other's names in their skin and on the walls of the grotto they have claimed. Triumphant, they leave for the East and disappear from our story.

Orlando comes in search and chances on the grotto. He recognizes her writing but cannot believe what he is seeing. He reads the writing once, then twice, then time again and again. Intertwined within Angelica's hand is anothers: an Arabic tale of love. He cannot accept what he reads: his Love professing love of him by a name for him he has not heard.

And as he reads, madness overtakes his mind. As Paris burns in the rain and the invaders retreat, our hearts lie in ruins.

Notes:
The genius of Ariosto, a contemporary of Leonardo, is his capacity to zoom in to humans from afar, and then leave the detail hanging in suspense, while we come back to watch the great tide of human events. His epic poem is full of unexpected role models, love stories and desperate times. It is telling, then, that it was he who coined the term “humanism”.

It is not surprising that his epic is about the Saracen advance on Paris and was inevitably driven by the Venetian defeat at the First Battle of Lepanto in his own time.

I wonder if Cervantes was snacking on this story in his account of the madness of the shepherd Chrysostom for the love of Marcela. Cervantes’ story appears out of nowhere – a technique so endemic in Ariosto’s epic that one critic called it “Cantus Interruptus”.

Still, given a choice, the modern reader (me included) would pick up Cervantes rather than Ariosto and perhaps that is our loss.

Darcee McCutcheon pointed me to Haydn's 'Orlando Paladino' at the Concertgebouw In Amsterdam. In truth i had not thought to look to opera – but on reflection, most of the great love stories have found their way into ballet or opera :/ Hadyn’s urbane brilliance well suits the even tone of the epic – it would have been a lot of fun to be part of the production Darcee linked.