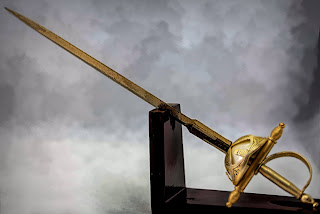 Abandoned in the barrows of the dead kings scattered in the steppes of Middle Earth are treasures beyond understanding. Here are the instruments of war; there are the baubles Kings and poets lived for, and died. Here are the great named swords – created by sorcerers to bite or parry.

In ancient times, swords were individually crafted. Swords that stood the test of time earned an individual name. In the sagas, they were referred to with respect and keenly sought to settle legal disputes.

Some swords were straightforward and used in battle. Such was the sword Skrymir owned first by the warrior Steinar. Named after one of the mythic giants, this excellent sword was never dirty nor troublesome to handle.

Other swords, the swords used in duels to settle legal cases, were troublesome.

Litigation in the old days could involve paying a fine or a trial by combat: an officially sanctioned sword fight.

On one occasion, the poet Kormac slandered a merchant in a drunken verse. As a result, Kormac needed a sword for a trial by combat, so he visited Skeggi, a magician.

Skeggi possessed an excellent sword. The sword was called Skofnung. In the old days, lawyers often tried to borrow Skofnung.

Kormac said sharply, “I do not believe in magical snakes.”

Skeggi added, “It also has a healing pouch.”

Kormac laughed the laugh of the young, “What will you sorcerers think of next? I do not need your words on words. Red mushrooms and mead are all I need.”

Kormac may have won against the sorcerer, but he lost the duel.

He did not prepare as commanded by Skeggi and drew the sword screaming from its rest. Kormac lost his case. His dignity was left in tatters. He suffered a split thumb and the loss of the duel ransom.

And afterwards, in the taverns of Middle Earth, he could be found unsteadily draining mead and blaming the sword and making up new rhymes.