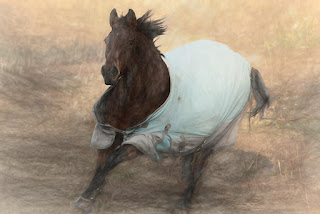 They were riding his horse. Black as night with a white blaze across its chest. Rising and falling slowly as the stallion flew like the wind. His arm was loose around her waist, like snow-tipped mountains around fields of gold.

Suddenly she was gone. But he rode on alone. Through green meadows full of gazelles, past cloisters for monks, through deserts, past caravans, and camels, over the cobbled streets of a hundred cities, into gardens aflame. She woke eyes wild and open. Slowly she settled back, tossing and turning.

This time she threw a bottle of Vodka at him and then stepped back, arms on hips, her black and white eyes flashing dangerously. For a moment it was beautiful and dramatic. But then it all went wrong. She tripped over the cat, and he ducked the bottle. They all ended on the floor. She imagined him calling her “random, unfortunate and frustrating,” which were all things she secretly called herself. She heard the wind whispering. “I wish we had never met.” She felt her heart about to break.

She did not want to hurt him. She just wanted him to pay attention. To her. She did not want to hurt the Vodka either, but sometimes bad things happen. So the dream was rerun. This time she drank the Vodka first and threw a bottle topped up with water and lemon juice. That turned out worse.
Return to Love (Short Story Series) INDEX
Notes: It is sometimes argued, persuasively, that love and hatred are two sides of the same coin and that the emotional investment in either state is indistinguishable. There is a strange asymmetry: one in love cannot contemplate hatred. One in hatred cannot contemplate love. Neither state may be reciprocated by the other subject - one can love or hate someone who has nothing but disinterest in you.
Labels: Love Series Short Story