Bernie died suddenly and unexpectedly a couple of days back.

For the past couple of years, Bernie was manager of a neighboring station near the Tallaganda Wilderness. He was a youngish, gentle bloke, full of stories and dreams. He spent his days chasing cattle, pigs and goats and built up a side-line that somehow involved sough-dough bread and chooks, much to the delight of the local wedgetail eagles and foxes. On his station, he got around in a vehicle that looked like it came out of a Mad Max movie.

He loved the bush although in a past life he worked as a risk and security consultant. He found time to come on a couple of hikes up into the mountains, following river and creeks and discovering a couple of pretty falls. He delighted in the Snake Orchids we tripped over on his far pastures.

Just recently, I started a course on flash photography, and he volunteered to sit as my model. I gave him the shots to send to those he loved, and in return he sent me an occasional video he made on his phone teaching me how to train bunyips, which make me laugh.

In turn, I told him the first people story about Currendelella: the night sky and death.

Stories are told to the living. Sometimes we tell stories about dying to help the living. He enjoyed the story, and then I took these pictures.

I will miss him. 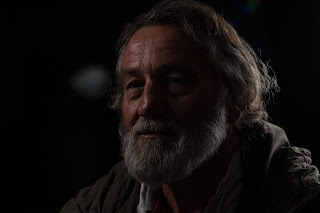 This story predates all organized religions. It is old beyond memory. It was collected by a school teacher in colonial times from an elder of the first people. She entrusted this story with him, telling him to retell it to all the people of the world. The school teacher's keen eyes were clouded by the enthusiasm and despair of the time. Instead of telling the story to the world, his age, disinterest by the world and the sands of time placed another layer of dust over this story.

The first people followed the rivers and other paths of the land, according to the seasons. In the warmth of the year, they live in small bands, enjoying the company of close kin and friends. In the evening, when the children sleep, there is a chance to sing songs that may only be sung by a wife to her husband, and to warm hands near the heat of a flame, to touch their chosen one in tenderness.

During the warmth of the seasons the small bands of the first people birth and feast on the bounty around them. In the cold of the year, the bands talk across great distances by smoke in the still of the morning. As the seasons become cold and food exhausted, the bands join together, and the tribe travels to new places, surviving by the strength of numbers in the time of cold and challenge. Sometimes in the cold they feast, sometimes there is famine.

You can still hear the names of a river, or a valley, or a track if you sit a while and listen to the wind or water.

Each of first people carried a map of the river paths in the powerful muscles of their legs. During lifetimes, they traveled the great circles of the rivers many times. In muscles was a recollection of the path of the rivers on the land, past feasts, and famines. There was the memory of where there are dangerous mountain crossings, powerful river currents, or strangers who will take food and kill.

At night, around the fires they teach their children a different sort of map. Across the night sky, in the patterns of the stars, lies a path and, near it, the unseen river: Currendelella. The colonials who came to their land call this the Milky Way.

Currendelella is always in the sky, in a vast land. That land, in the sky, constantly moves. Even though it is more often than not obscured by the sun or the moon, the First People know the shape. When, in the darkest nights, Currendelella becomes bright, they show their children the deep holes in which they can fish. They tell them the stories about when the gaps in Currendelella appeared, and how some of the stars rained on the earth from these places. They show them the shadows of hunters waiting to trap the unwary and point to dangerous currents they must avoid.

They teach their children that we will all die. When we die, our spirits will travel to the edge of the world and wait for the path and the unseen river to touch the horizon and give us access to the sky. Then we will leave this world, the world of our birthing, and journey to that country that awaits us.

Around us, as we travel the land of our birthing, are many eyes. Some of the eyes have bodies that are substantial, like the dragonfly. Other eyes have bodies that are insubstantial, always just out of sight. But like Currendelella we know they are there. We can see the path they take by the tracks they leave on the land. We can see the glint of their wings as they jump into the air. We can feel the winds they call.

Some of the insubstantial are gentle spirits that respect life, but others are dangerous spirits, intent on big trouble and responsible for wind storms.

One night, the world changed. It happened when the edge of the world came close to Currendelella, the Milky Way.

These spirits of the dead were arguing among themselves as to who should lead them on their last journey to their new home in the sky. The gentle spirit heard the bitter arguments and listened to the lack of trust. At the same time, she saw other spirits taking the path into the sky without being troubled by arguments about leadership.

She also heard the approaching dangerous spirit, and at first was inclined to hide in the seed pods of the flower bushes nearby. First the creamy flowers of the Lomatia (where the bushes were full of seeds ready to burst), then the great red Waratah (a huge sweet flower), and then the Lamertia (a crimson flower, sweet as honey). But when the dangerous spirit arrived, she saw all were in danger, and so hid the human spirits in two of the Lomatia seed pods.

She then tore her own wings off and placed them on the seed pods the humans were hiding in. She called on the dangerous spirit to blow his tempest. High clouds rose, thunder claps could be heard in the distance; insects rose into the air pursued by small birds; ants colonies marched to higher ground.

The gentle spirit died, her form preserved in the creamy flowers of the Lomatia. But the seed pods, with their wing, sped into the sky, taking the human spirits to Currendelella.

When facing death, do not waste time choosing one to lead you into the sky.

The path is clear. To live without fear, remember to flow with the rise of the Lomatia seeds when you die.

Postscript: In a sad twist of fate, Bernie's father died shortly after his son's death. They were buried in a joint service, in the city of Parks in the Central West of New South Wales.