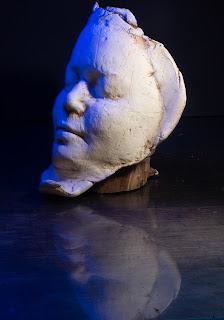 Homer tells how the King of Ithaca, Odysseus farewelled his young bride, Queen Penelope, with the infant Telemachus at her breast. He finally brought the war against Troy to an end ten years later by stealing the Palladium of Troy and designing the deceit of the Trojan Horse. For his craft, the Gods cast him to the furthest realms for another ten years.

For twenty long years, Penelope waits for the return of Odysseus from the Trojan Wars. Left with her son, she survives in a world that increasingly believes her to be deserted or widowed. She falls asleep at night crying for her lost husband. Outside, in her halls, the fifty women her serve her every interest mediate the interests of suiters drawn to Ithaca's wealth.

During Odysseus's wanderings, the ghost of Agamemnon warns him to beware Penelope on his homecoming. Take nothing for granted, test her, tell her only a part of the truth. Agamemnon had a reason for his distrust of wives - his wife and her lover killed him and his entourage on their return from Troy.

During his infidelity with Calypso, Odysseus tried to explain his feeling for Penelope and failed:

“Goddess, do not be angry with me about this. I am quite aware that my wife Penelope is nothing like so tall or so beautiful as yourself. She is only a woman, whereas you are an immortal. Nevertheless, I want to get home, and can think of nothing else.”

The ghost of Agamemnon told Odysseus he would be able to trust his son. But advice is cheap: the Oracle had already told Odysseus that his son would kill him.

We remember just one moment of Penelope's life, said to typify their love. A beggar stands before her, claiming to be her husband, the hero Odysseus. Penelope cannot believe that this older man, wrinkled by time, is the man who brought the Trojan War to a bloody end, a man she has not seen for two decades. To test him, she asks him to command a servant to move their bed. Odysseus reminds her that this cannot happen as the bed rests on the branch of a living olive tree.

We do not remember the rest. Chaos reigns outside the bed that she denied those suitors who sought her wealth. After Penelope and Odysseus's lovemaking, they wake to find bodies hanging in the outer halls. Her son, Telemachus, has run rampant, murdering twelve of her fifty chosen handmaidens.

The last epic poem in the Troy Cycle burnt in the libraries of of the rich on the coast near Pompeii. We do not remember how, after the homecoming, Odysseus was killed by the madman Telegonus, his son by the witch Circe. Telegonus flees Ithaca with Odysseus's body, Penelope, and her son, Telemachus. On return to the witch's island, Circe gives the living immortality. She marries Telemachus and births the child Latinus, whose name is given to the language of the Romans. Telegonus marries resolute Penelope, who bears another son, Italus  - the founder of Rome.

Do you see love here? Was the gift of immortality a curse? Or is this an opera seria - stories of a world of bittersweet survival, fear, and opportunism - twisted into the foundation story of a great city.

In the absence of the Telegony (the lost Greek epic that tells the final stories of the Troy adventure) I have happily accepted Hyginus, a freedman of Augustus, as a credible source. I am not quite as adventurous as Atwood and Frye - finding significance in loss as well as reinventure.