Waxing and Waning in the Fourth Phase 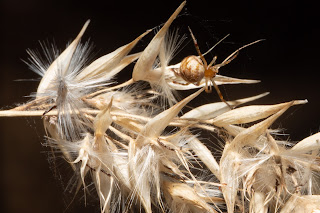 Wallaby grass is starting to cure in the meadows as Summer enters its final phase. Unlike other years, the pastures are remaining green and Scout forages for delicacies under stormy skies. 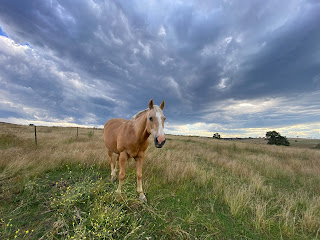 The Roman Varro wrote: "we have two measures of time, one annual which the sun bounds by its circuit, the other monthly which the moon embraces as it circles". The annual movement of the sun gave farmers four periods of roughly three months each: our seasons. Varro further divided the year into eight periods of 1 1/2 months to better specify rural tasks. Superimposed over this was the monthly movement of the moon, and a preference for performing different tasks during waxing or waning phase of the moon. Some of these such as the caution about cutting hair or shearing while the moon is waxing (lest you become bald) now seem pure superstition but the undertaking of some tasks according to the amount of night atmospheric light (and a more tenuous association with wind direction) might have a modicum of fact.

Unlike the civil calendar designed for town folk, Varro's divisions based on the rising of Northern Hemisphere stars, were not arbitrary. They were based on long natural observations across a range of phenomena:

"...there are several remarkable differences of character; so that, for instance, the season may be told from the leaves of such trees as the olive, the silver poplar, and the willow, by the direction in which they lie; thus when the leaves of these trees turn over it is said that the summer solstice has passed. No less remarkable is the behavior of the flowers which are called 'heliotropes' from the fact that they face the rising sun in the morning and follow his course until the setting, facing him the whole time."

Another Roman agriculturalist, Cato the Censor, pointed to the dramatic economic effect of Summer on outside work. He noted that in places where outside work, like constructing farm buildings, became impossible, this might increase the price of construction by 25%. 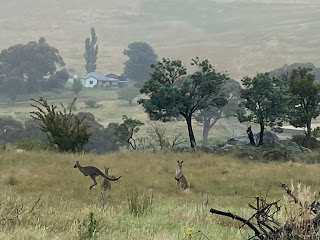 According to Varro's divisions, I am now in the fourth phase: in the Northern Hemisphere this would be from the Summer Solstice to the rising of the Dog Star. Down here, in the Southern Latitudes, we lack a Dog Star, but we can normal tell the burning phase of the Sun because of the heat that radiates. And, the leaves of the olive, the silver poplar, and the willow have turned.

The First People of this continent were skeptical of any suggestion that the Sun warmed the world. If the Sun was so powerful, why is it so feeble in winter - and why, in Summer night does the sky still burn with the heat of the day? Instead, the people believed that heat emanated from a part of the sky close to the constellation of the Pleiades. While there is a disconnect here between cause and effect, one cannot fault the association with heat and the position of the Pleiades in the sky.

This year's Summer lacks the normal burning heat that burns this continent to a crisp. Instead, my world is emerald green. 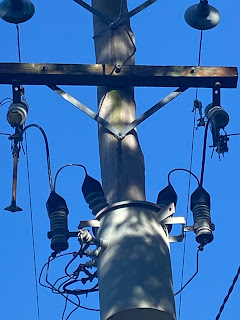 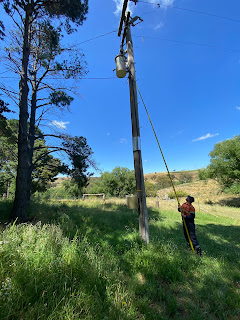 Still, while this means no power and no internet, there are the compensations of morning coffee brewed in a billy next to the vines. 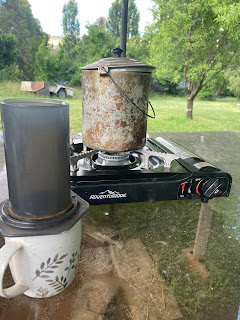 There are other compensations. My grapes and berries are growing fat on there vines - a bumper harvest of raspberries, strawberries, fruit of the forest and Loganberries. lavender is almost ready to pick and dry. However, a single late frost and a mob of cockatoos have decimated the ordinary harvest of plums and early apples 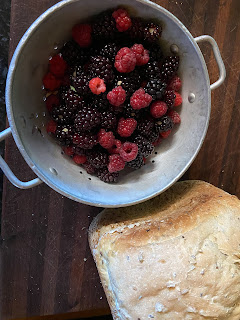 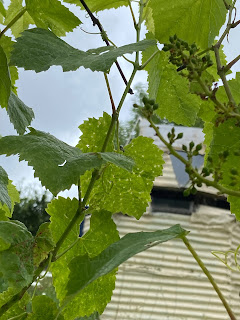 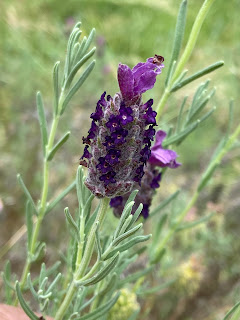 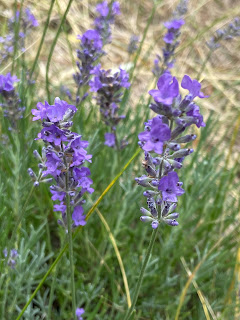 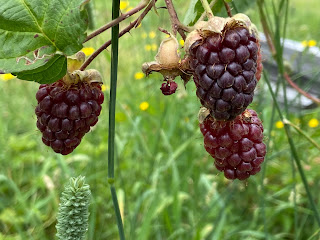 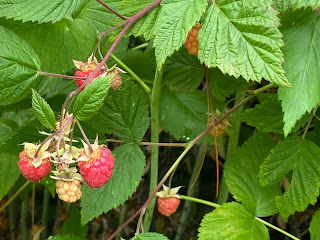 Cato the Elder in De Agicultura wrote of grapes:

"When the grapes are ripe and gathered, let the first be kept for household use. See that they are not gathered until they are thoroughly ripe and dry, that the wine may not lose its reputation. Sift the fresh husks daily through a bed stretched on cords, or make a sieve for the purpose, and after treading place them in pitched jars or a pitched vat. Have this sealed tight, to feed to cattle through the winter; or if you wish you can soak some of it a while and you will have an after-wine for the hands to drink."

Olives ripen more slowly - but, now is the time to prepare. Cato wrote:

"Let all necessary preparations be made for the olive harvest: Let ripe withes and willow branches be gathered betimes as material for making new baskets and mending old ones. Have dry oak, elm, nut, and fig sticks for making pins buried in the dunghill or in water, and make pins from them when needed. Have oak, ilex, laurel, and elm levers ready. Make the press-beam preferably of black hornbeam. Take out elm, pine, nut, and all other timber which you are felling, when the moon is on the wane, after noon, while there is no south wind. It is ready for cutting when the seed is ripe. Be careful not to haul it or work it in the wet. Timber that has no seed is ready for cutting when the bark peels. Do not handle any timber or vine when the south wind is blowing, unless you are compelled to do so."

Varro dealt with the coming harvest:

"In the fourth period, between the solstice and the Dog Star,​ most farmers harvest, because it is a saying that the grain is in the sheath for fifteen days, blooms for fifteen days, dries for fifteen days, and is then ripe. Ploughing should be completed, and it will be more valuable in proportion as it is done in warm ground; if you are 'breaking up' the ground it should be crushed, that is, gone over a second time so that the clods may be broken; for in the first ploughing large clods are cut from the ground."

I have forgone plowing this season - it is too wet.

The alpacas are due for a shear - COVID has delayed it for too long and the fleeces render the alpacas as large as small wildebeest. 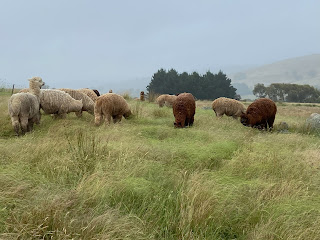 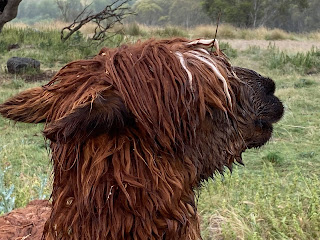 (The elder alpaca Flash chooses to wear his hair in this style - and has resisted all ad hoc efforts to trim. Shearing will be a bit of a shock.)

This year the Southern winds have taken matters into their own hands, throwing down trees in the waves of storms that have battered the South East of Australia. Accordingly, I have been busy in cutting up the fallen trees. 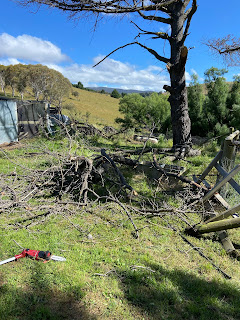 This year it has included rebuilding yards destroyed by falling branches in preparation for the shearing of the alpacas (perhaps during the waning of the moon, in February). 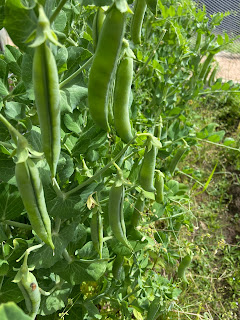 Varro went on to write:

"You should sow vetch, lentils, small peas, pulse, and other plants, which some call legumes, and others, like some Gallic farmers, call legarica, both words being derived from legere, because these are not reaped, but are gathered by pulling. Hoe old vines a second time, young ones even a third time, if there are clods still left."

Darcee McCutcheon said…
What a bountiful season you have had this year. Would that more years could be like this for you and yours.
Monday, January 3, 2022 at 6:20:00 PM PST