The problem with names 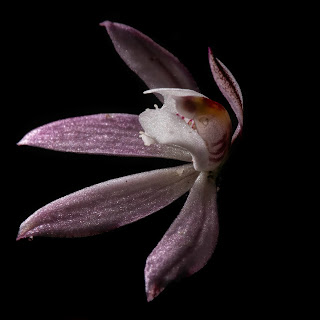 This small common orchid was originally grouped with the pink finger spiders in 1810 by Brown as Caladenia carnea – or 'beautiful centered fleshy'. It gained the popular name 'Pink Lady Finger Orchid'. A German botanist Reichenbach named the darker variant (above) as a brown variant in 1871. In the event, this was converted into a common name, ‘Dusky Fingers’, a widely used term of abuse of the first people. It gained separate recognition as Caladenia fuscata in 1989. None of the scientific names hint at its original name.
I assume both orchids were well-known to the first people because the bulb is edible. It seems unlikely that the name is the English form of an ancient name. The original name is not recorded in any of the usual resources. Frustratingly, some smaller heaths are recorded with dream stories about the tiny folk that live or hide in wild flowers, especially the shy flannel flowers. One of the small folk gave its name, Epacris, to both the white and and the prickly heaths.

Perhaps the ancient name of these orchids was ‘fingers’ with a modifying based on color or taste or size. I can't exclude the possibility of this being a reference to discolored fingers - which is a red flag: cyanosis.
‘Fingers’ had a couple of Yuin words associated with it. Burranoo, Perring, Poukrannew. But then, there are other ‘general’ names associated with wildflowers: Tumberrellong, Gunguraw, and Gamba.
A disproportionate number of Australian wildflowers are named after English slave traders, including George Hibbert, which annoys me a great deal. That a commonly found orchid might resonate with a racial epitaph is offensive.
I confess that i like the sound of Tumberrellong – what i would give to hear that word spoken aloud.