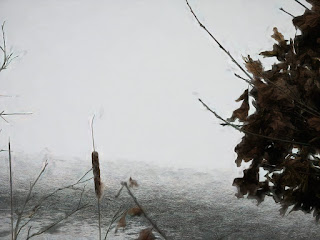 A couple of years back, around this time, I found myself living in Massachusetts, impatiently awaiting the novelty of a really cold winter.

Decorating the elegant New England homes, corn husks were tied to pillars or dressed in effigy and staked in front yards.  Some date corn husks to the feast day of Saint Stephen in Scandinavia and England associated with the Yuletide celebrations.  But Saint Stephen was simply a cipher for the pagan god Freyr, a local concession to common practice church law was unable to suppress or replace.  In the 13th Century, Sturluson wrote: “Freyr (Ing) is the most renowned of the Æsi, he rules over the rain and the shining of the sun, and therewithal the fruit of the earth; it is good to call on him for fruitful seasons and peace. He also governs the prosperity of men.”  While not worshipped since the 11th Century, we still name girls Ingrid in his favor, New England homes celebrate the bountiful harvest with corn husks, and we all eat a Christmas ham at Christmas.  Poor Freyr (“no maid he makes to weep”) will die at Ragnorok.  The same sword he bargained away to marry his beloved will kill him.

A busy shopping center bisected by a train line serves the New England homes at Newton.  People tramp over the train tracks as though they were walking over any other road.  Beneath the superficial and depressing sameness of the fast-food donut franchises emerges a different picture – in the alleys are a confusion of different restaurants.  Some, the Indian and Thai, are recognizable to the Australian eye.  But others date from another age.  Here there is the Café Saint Petersburg and a variety of other Russian and Armenian restaurants.  Reminds me of a sign on an old building in Salem – an old building on the pier run by the Council to assist Russian émigrés.  In the local bread shop, you can buy a Borodinsky – a heavy black bread – coriander malt dark rye, from a shop assistant who speaks with a strong Russian accent.  Here is the legacy of the great Diaspora from the Russian Ukraine and the Ottoman Middle East 150 years ago.

At school assemblies, children of every race crowd school stages.  Beating out songs with an African theme. 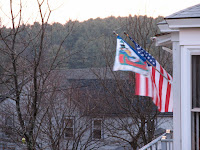 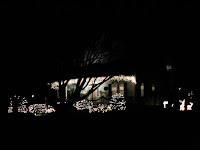 Flags fly. Decorations for the holiday season are being prepared – with Christmas and Hanukah in the offing.  The occasional car can be spotted with a tree on top, and in the background the present corn husks celebrating the harvest – and almost gone now, the last of the decorations from Halloween and the elections.

This place moves from one celebration to another. Indeed, the cultures from which such celebrations might derive are legion.  The old catholic church calendar was packed with feast days to remember the heroes of the church.  But the church’s attempt to replace the older pagan celebrations based on the passage of the seasons did not survive the fall of Constantinople and the industrial revolution.  We continue to use primary divisions of time that date from before the Christian era – some so old we cannot identify their origins with certainty.

The division of our week into seven days reflects the number of heavenly bodies that traveled in an ecliptic path and were visible to the ancients.  In the names of our days, we still use the names of the old pagan gods – Monandaeg (moon’s day), Tyr’s day, Wodan’s day, Thor’s Day, Frigg’s day, Saturn’s day, Dies Solis (sun’s day).  Tyr was the ancient Germanic god of war, older even than Wodan, and he is destined to die after killing the guardian of hell at Ragnorok.  Wodan is the allfather, husband of Frigg, father of Thor – but again at Ragnorok, “then shall Frigg’s sweet friend fall.”

The persistence of these names and celebrations, long after state or religious sanction was given to them, and sometimes in the teeth of solid state or religious opposition, deserves reflection.  Is this just another limit of the power of law?  Would any attempt to change the names of the days or the months work?  All children know of the futility of trying to legislate to stop the tide from coming in – and slowing the passage of the earth’s progress around the sun to a more convenient metric seems presently outside our capability.

Changes in the calendar for similar aesthetic or religious purposes have been unsuccessful since the Romans renamed Quintilis as Iulius (July) in 44 BC to honor Julius Caesar and Sextilis as Augustus (August) in 8 BC to honor Augustus (Gaius Julius Caesar Octavianus).  More recent attempts have failed – the most recent effort, during the French revolution (a brave attempt to give each day a unique, fancy, name) is now long forgotten.  The French attempt follows in the footsteps of the failure of Emperor Commodus’s attempt to rename all twelve months after his adopted names (Amazonius, Invictus, Felix, Pius, Lucius, Aelius, Aurelius, Commodus, Augustus, Hercules, Romanus, and Exsuperatorius).  Nero’s attempt to change Aprilis to Neroneus similarly failed to catch the common imagination.  To be fair, Charlemagne’s renamed months lasted in Germany until the 15th Century because they reflected the cycle of life (Brachmnoth (June) – plowing month, Wonnemanoth (May) – lovemaking month).

Despite these setbacks, we have a record of successful reforms to improve the accuracy of each of the calendars in everyday use – the Western (Julian/Gregorian), Chinese, Hindu, Buddhist, and Islamic.

The Julian reform introduced in 46BC by Julius Caesar on the advice of that trouble-maker, Sosigenes of Alexandria formalized a solar calendar with months at fixed lengths where one year had 365 days, 12 months, and every 4th year was a leap year with 366 days. In practice, this reform established our recognizable calendar, with a leap year aligned with the tropical year (at no mean cost, the Romans had to endure a 46BC with 445 days).  Late in his life, Augustus fiddled with the number of days in August (to make it equal in length to Julius’s July), establishing the legal pattern of days we still use for each month to this day.

However, the Julian reform gradually moved out of synch with the earth’s rotation.  Every 134 years, it gained an extra day by reference to the tropical year.  This inconvenient result was remedied on the basis of legal policy advice (deriving from the first official Council of the Christian Churches in 325 AD, at Nicaea), which held it desirable that the vernal equinox occurs on 21 March each year.  In 1582, Pope Gregorius XIII declared that the day after 4 October 1582 should be 15 October 1582.  Furthermore, the rule for leap years (which said that years divisible with four should be leap years) was changed so that years, at the end of the Century, should be leap years only if they were divisible with 400 (e.g., 1600, 2000, 2400, etc.).  The Gregorian reform was belated picked up throughout the Western world (except for the Russian Orthodox church).

Several years ago, the Commonwealth of Australia accidentally repealed the old Calendar Act – which adopted the Gregorian calendar as law in the British Empire.  At that time, lawmakers were blissfully unaware of the consequences of this error – and that the Australian Capital Territory had reverted for about 20 years - from 1984 until 2005 - back to the Julian system (by that stage about 13 days into the future of the Gregorian calendar).  When the error was discovered in 2005, it was remedied without succumbing to temptation of changing a couple of the names or attempting to metrify the divisions of the year.

I remember being amidst bare trees as winter approached. Despite all the attempts to tame time, the cold would return to this land, as it did before the pagan gods gave time its form.  Perhaps Ragnorok is still just a heartbeat away.  Ice specks swirl in the air and, in the perma-shade, water drips freeze into solid stalagmites near the schools.  Like the columns of the old temples, the ice freezes solid as the tolerance in the children's eyes, the likewise strength, and weakness of democracies.