Those who name the Gods rule 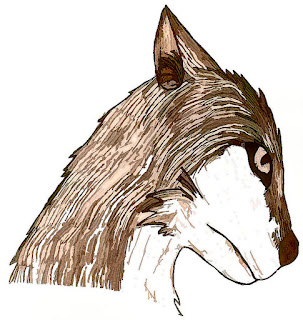 Let me sing once more of the meeting of the pagan priestess, Steinvora, with the Christian missionary, Thangbrand.

Do you not remember these names?

Surely you have heard of these two. In one day of argument, they settled the shape of the world and the names of each of our days.

In 1000AD, Thangbrand led the Christian missionaries into Iceland.

With wild eyes and easy promises, Thangbrand was intent on change. He made many promises of good health, long life, and victory in the name of the new Roman god, the Christ Jesus. On his way to convince the Althing, the Icelandic Parliament, his band killed many who disagreed with them. On the Hill of the Laws, one of his missionaries cursed the Gods, calling Odin and myself naught but 'domesticated wolves.'

Eventually, Thangbrand and the missionaries came to the home of the pagan priestess, Steinvora. She invited Thangbrand into her house and provided food and drink to his retainers.

Thangbrand and Steinvora debated theology for a day and night. While the debate was fierce, Steinvora conducted the argument with restraint and respect.

They agreed that the world is not touched kindly by the Gods. Life is short and unpredictable. Risk abounds. Wolves prowl throughout the world, among both Pagan and Christian.

She asked, "What matter the names given to the Gods?"

He said, "Names matter; they are the power of the world. Those who name the Gods rule."

The pagan priestess asked, "Have you heard that Thor challenged the Christ Jesus to single combat, but the Christ ran?"

Thangbrand replied, "Thor is naught but a hollow name, a thing of dust and ashes. The old Gods now live only at the behest of my God."

The priestess then asked how it was that the most powerful ship in Thangbrand's fleet of warships had sunk before landfall in a thunderstorm. "Where was the Christ Jesus when a storm awoken by Thor shattered the ship to pieces?" But perhaps she answered herself, as she continued, "No God could help."

Some think that despite the breadth of the debate, it was inconclusive. They believe that Thangbrand left before they could bring the matter to an outcome.

But the meeting framed the vote of the Althing shortly afterward to anoint the Roman God the Chris Jesus, as God of the Icelanders. And in turn, Thangbrand honored the silent pact made with the pagan priestess, Steinvora: to this day; we still name each day of the week (except for Saturday) in honor of the old Gods.

Sol: in whose honor we still name Sunday (Sol's day) and who lights the sky. She is pursued by the wolf Sköll.

Luna: in whose cold honor we still name Monday (moons day). He is pursued by the wolf Hati.

Týr: in whose honor we name Tuesday (Týr's Day), the ancient steppe god of war. Some claim he is older than Odin. He captures the wild wolf Fenrir. He will be killed by the domesticated wolf Garmr.

Odin: (sometimes Woden): who still commands us honor him on Wednesday (Odin's Day). With the rest of the gods, he dies at Ragnarök in the teeth of the wolf Fenrir.

Thor: Once a friend of Loki, beloved by the ordinary person (the glorious son of the Earth), hated by the wolves with passion. He enjoys the honor of the naming of Thursday (Thor's Day). He is fated to kill the wolf serpent Jörmungandr with his hammer before dying of the serpent's poison.

Freyja: the goddess of sensuality, in whose honor we venerate Friday (Freyja's Day). A shapeshifter, she once quickly donned the form of a lover, an eagle, or the other goddesses or gods. Sometimes she is thought to be the consort to Odin (as the goddess Frigg). Freyja lives in the moment, and at that moment may be a child, a lover, a homemaker, or a seer.

When it came time for the people to name Saturday, all the Gods were dead. The great tree lay in ruins, and the rainbow no longer bridged the worlds. Wolves roamed the land, and chaos spread as the new religion of the Romans washed away the past.