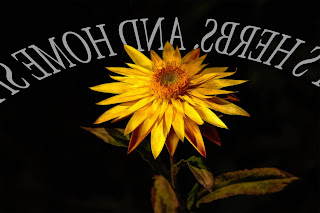 Sara dropped by to Genny's Herbs, and Home Spells to get some hair dye. The shop smelt a little musty from the dried flowers and boxes of herbs that filled the room. There was the unsettling impression that mice and insects were close at hand.

The resident witch, Genny, was working on a love incantation which wasn't going so well, and welcomed the interruption. She vaguely recalled that Sara was blond when she was smaller but now had black hair with silver extensions and the odd bit of metal sticking out of her ear and nose.

Sara's eyes casually drifted over the sheet of paper Genny had been drawing on, full of symbols and references to moon riders, life hue and tear-falls. She blurted out, "I need to dye my hair red, please."

Genny whisked away the paper, "Well, dear, you will be wasting your money until the present dye washes out."

Sara looked glum. "Isn't there anything you can do? Can I bleach it or something? Do you have a spell that can do it?"

Genny fixed them both a coffee, and they sat down. Business was a bit slow in the winter cold, the love incantation was suffering frost bite and Genny was happy for the company.

"You have lovely hair. You shouldn't wear it thin with additives and chemicals. Besides, most people would pay thousands of dollars for your natural color. I would love to have your hair."

"It looks so plain. But, you are a witch. Don't you have a spell for that?"

"Indeed, we have spells for all sorts of things. But we Wicca choose to use our art in the service of others, not for our own selfish purposes."

Sara nodded, approving the sentiment, but thought to follow up with "I always thought you Wicca could  cast a spell that would magic money out of thin air."

"Magic is a bit more subtle than spells and clicking your fingers."

"Let me tell you a secret. For starters, we do not use spells."

Sara gasped, "But your shop is called 'Genny's Herbs and Home Spells' - doesn't..."

"People come in expecting to get some magic words they can speak, and the world will change. Can't talk 'em out of it. But magic is subtle and requires a bit more effort."

Genny looked at Sara, and asked her shyly, "Would you like to know more?"

Sara smiled and nodded her head.

Genny started, "A real witch finds ways of visualizing outcomes - and the visualizations that work get written into a witch's own Book of Shadows. Not a spell book. More a practical guide to natural magic."

"Can you give me an example? I would love to learn how." Sara was quite attracted to the idea of acting for the community good and had already thought of a couple of clever ways of avoiding the problem of appearing to act selfishly. "I would love to set up a shelter for, um, lost animals. Like cats and squirrels." Sara was torn about whether she should have mentioned the little dragon but then reminded herself that she had left her problem with at home promising she would return with chocolate bars and teaspoons.

Genny was pleased with the interest and poured them a second coffee with a bit of cinnamon and chocolate added for effect. She brought a small bag with a couple of items and laid them down on the table beside them.

"Ok. Let me give you a real-life example. I have a bill coming due for $80 for some work I am getting someone to do for me. Let's assume that I do not have the money to pay the bill just yet. So, let us use magic to deal with the bill."

Sara picked up her ears and watched closely.

Genny picked out a couple of green candles and, as she lit them, said, "Normally I would do this at a sacred place, but this is warm, and we will make do without the alter and the robes and the theatre. These two candles invoke the silent presence of Goddess and the God - not that I demand them come to me, a mere mortal. I think that they enjoy coming over here when we need them. Next, I will light this block of charcoal and sprinkle a little cinnamon and sage onto it - they are surprisingly good at increasing your prosperity."

Genny then carefully fished out a piece of paper and a pen. She paused and dabbed a drop of patchouli oil on her face and offered one to Sara, "Great for wrinkles, can never start too soon."

She wrote, in large letters, '$80' and settled into her role as magic maker spreading her hands out wide, "Now I visualize that this paper is no longer a piece of paper, but the bill itself." She paused and drew a square around the amount and said in a low voice, to avoid breathing in the smoke coming off the charcoal, "Now we assert control over the amount."

She drew a giant 'X' with a flourish through the amount and looked up at Sara. "See, we have canceled the existence of the bill. It has zero power over us."

For extra efficacy, she muttered a short prayer to the onlooking silent gods calling on the Sun, Moon, and Stars to pay the bill while rubbing one of the green candles with a couple more drops of patchouli oil.

Sara watched on with her mouth open, wondering how the same technique could be used to set up the refuge she desperately needed.

Unperturbed, Genny picked up the thing that was no longer a mere piece of paper. Once more, she called out, "Sage, herb of Jove, heed my call. Cinnamon, herb of the Sun, attend to my request." and then she lit the paper, which exploded in a burst of pent up energy setting off the fire alarm and turning on the shop's fire sprinkler system.

There was a sudden rush to the doors, witch, girl, mice and small spiders all struggling to get out first.