The place i live, the Tallaganda, was once quite wild. Cruelty and kindness sat down to dine at the same table. 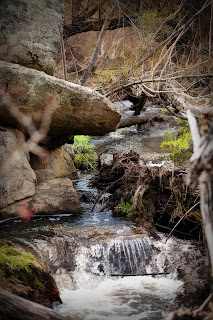 During the gold rush, the temptation of easy wealth created those who worked hard for it, and those who killed for it. A group of bushrangers once roamed the nearby hills, stealing gold from miners with violence. In turn, the bushrangers were tracked down and shot or hung.

Our community is still divided about these happenings. Some, like my father, loved the stories of their exploits, and recognized the poverty and neglect that led to them taking up arms. Others sympathized with those they preyed upon.

Decades ago, i met the older residents of the valley and we talked of the past. Some of old folk had fleeting recollections of the events of the wild years. They told me about the lost gold of the Clarke Gang. The stories all had the same basic elements: the gang (from the 1860s) stole from the Araluen/Majors Creek gold fields. They hoarded their gold, planning one day to start again down Gippsland way. Before they had a chance to escape, they were tracked down and hung, and their gold has never been found. Not from want of effort - the gang's hideouts were all mined a couple of times, and lots of other likely places excavated.

A former gang member, the Long Tailor (so named because he was once a tailor and was quite tall) had a girl friend over this side of the range, and the gang sometimes used her hut as a staging post for their raids on Foxlow station. When the Long Tailor was injured in a fight, and the gang sent him ahead to Gippsland to arrange their retirement, but he, perhaps, died in suspicious circumstances along the way.

One day, an elderly woman from the old forestry settlement, now long-gone to the stars, started to tell me the same story. There was a small difference in her version. She confided in me a detail she considered of no import: the girl friend had been told that the gold was being stashed safely beneath a Top Hat - by which she thought that the gold was being looked after by one of the wealthy station owners who courted the bushrangers, and traded fast horses with them.

Separately, and totally unrelated, i have been hunting for a lost waterfall, described once by members of a young cricket team discovered and named at a picnic at the turn of last century. They called it Stove-Pipe Hat Falls. A stove-pipe hat is a distant relative of top hat, a curious name for falls.

After years of being hidden under willow tree debris, a recent flood has cleared a small waterfall. From a distance i made out the 'rim' of a hat falling across the stream. Above the rim, a tall stone hat. Beneath the hat was a small cave (presently home to a wombat den). Unmistakably, this was Stove-pipe Hat Falls. 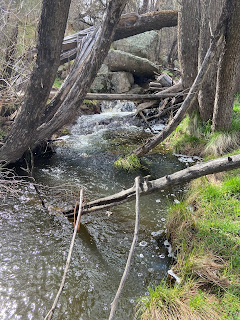 The name well suits the small falls - a distinctive rock formation sits above the falls. Beneath the hat, one can make out the shadow of nose, and a stone monocle (described by the cricket team). More recent events have added the hint of a pipe to the scene. 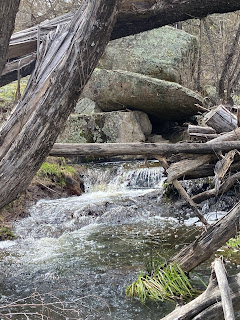 Of course, there was no sign of gold. But then, it is not only gold that glistens.

Notes: Despite the stories, the Clarke Gang didn't steal as much gold as folks think (and some think that that were unjustly accused of every crime that ever happened in the district). Chances are that the Clarke Gang spent any loot as fast as they stole it (one of the Gang's sisters was known for owning more fancy dresses than anyone else in the district). If they had a trove, it probably went south with the Long Tailor, and was caught up in the mystery of his supposed death. But, even if i am wrong, if there ever was a scatter of gold grains at the little waterfall, the cricket team would have found them.

Perhaps the next deluge will bury the fall under a tangle of willows for another century.

I have departed from my normal practice of locating this by map and not given a location, for while this waterfall is on public land, it is not accessible to the public.

Or come visit my index to the Waterfalls of South Eastern Australia.

Peter Quinton said…
Thankyou Anonymous (amazing story)
Some of the best stories are those that thread themselves through the years.
Friday, October 1, 2021 at 10:53:00 PM PDT