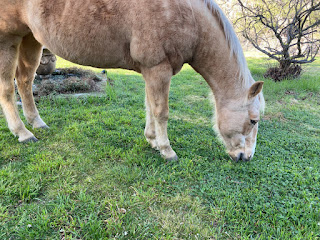 We are fast coming up to the Spring Equinox, which on paper is a mean between mid winter and summer solstice. This year the temperature has been unpredictable as the path of the pandemic, bouncing between heat and cold, wet and dry. As an aid to dealing with fast growing lawns, i have called in help.

"The following work should be done in the spring: Trenches and furrows should be made, ground should be turned for the olive and vine nurseries, vines should be set out; elms, figs, fruit trees, and olives should be planted in rich, humid ground. Figs, olives, apples, pears, and vines should be grafted in the dark of the moon, after noon, when the south wind is not blowing."
Cato goes on to describe a couple of different ways of grafting olives and grapes. He also points to the advantages of a diversity of farm objectives:
"If you ask me what is the best kind of farm, I should say: 50 acres of land, comprising all sorts of soils, and in a good situation; a vineyard comes first if it produces bountifully wine of a good quality; second, a watered garden; third, an willow-bed to produce baskets; fourth, an oliveyard; fifth, a meadow for grazing animals; sixth, grain land;​ seventh, a wood lot; eighth, an orchard;​ ninth, a mast grove of fodder trees."
The roman authors discuss the need to deal with weeds early. Cato says, of planting a cypress bed: "Hoe often, and clear off the weeds as soon as they begin to grow; for if you pull up the growth when it is hard, you will pull up the cypress with it." Here, i have been dealing with serrated tussock and blackberry - both which would have benefitted from early attention.
This year. I have also been digging out a new vegetable patch (although the idea of also planting an elm woodlot is very attractive - both elm and willow burn solidly). The vegetable patch will be eventually enclosed to exclude bird, roo and wombat. The day after this effort with cultivator and spade has been spent with pain killers and a very sore back, both side effects omitted by Cato. 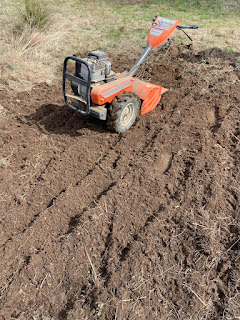 An additional task this year has been to fell bifurcating gums. In heavy winds, those gums that have grown in this way tend to split and fall - while their single stemmed neighbors seem to resist damage a little better. Here one stem has been left to grow (as a shade tree in a large grove) while the second stem felled and stacked.
Cato notes the importance of a woodlot:
"It is especially desirable to have a plantation​ on a suburban farm, so that firewood and faggots may be sold, and also may be furnished for the master's use." 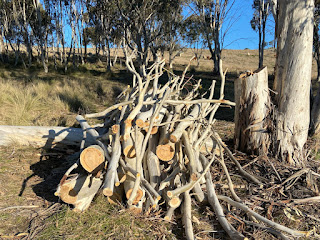 Reasonably straight branches have been set aside for repairing tools.
Cato is quick to point out the uses of wood for a great deal of basic farm utensils including wooden mortars, scoops, pins to hold olive presses in place, spades (romans used about 1/3 iron spades to 2/3 wooden spades), oil ladles. Osier-beds (stands of willow tree) were particularly useful for a whole range of container applications. 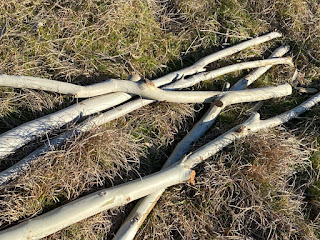 Cato makes an oblique reference to iron and wooden spades. Other authors suggest that a 50 acre farm should possess 10 wooden spades and 5 iron spades. A funeral monument at Rome displays a 'pala' (the word continues in use to describe the blade of an oar), similar to our metal spades but with the addition of a cross bar about 6 inches up the handle from the top of the wooden blade of the spade - which would have enabled the spade to be pressed far deeper into the soil than our present models. 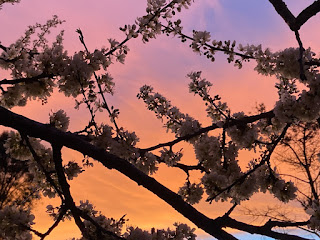