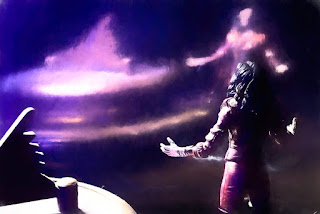 The moonlight picked out the vines leading to the mantle of the highest window of the old Library. The window was open to the sky. Sitting atop the window was a small dragon, its scales shimmering in the moonlight. Maxwell grabbed her hand as the dragon took a bite out of the book it was holding.

Annapurna gasped as Maxwell grabbed her hand. She risked a questioning look in his direction. Just then, a soft voice behind them said, "Freeze."

They both froze, watching the small dragon sitting on top of the old Library.

The soft voice behind them said quietly, "You might be in great danger. Next time a cloud passes between that thing and the moon, I will grab you back into the shadows with me. We need to get off the streets fast."

Confusion ran through Annapurna's mind, and then terror, as the little dragon stopped chewing and looked down into the square below. The courtyard clouded over, and a strong arm guided them back into the ally that led back to Main Street. As they moved, they heard shouts behind them.

Annapurna took the opportunity to ask, "Is that you Ged Richards?" recognizing the drawl of the farmer who had joined the writers' group a couple of weeks back. She turned and had an impression of a tall man, well dressed carefully against the cold.

Ged hurried them along, "Yep. Please watch where you walk – the pavement is slippery and you really do not want to fall tonight. Sorry about the fuss back there."

Maxwell said, "That must have been a practical joke, right? Like, those kids back there, I think..."

Ged said, "Could be, but there have been some strange things happening here. But, it is best not to get mixed up in this sort of stuff. Am I right?"

Annapurna asked, "Was this an elaborate plot to mug us? If you have saved us from that, I am in your greatest debt, Ged Richards."

"I ain't sure about that, Miss. To be honest with ye, I ain't too sure about a lot of the things I have seen just recently."

Maxwell said, "It looked real to me."

"Ain't no such things, to be sure.” Annapurna thought she heard him said more softly, “Or there shouldn't be."

"If there was to be a robbery, we should report it to the authorities." A sudden thought hit her, "Or someone may have broken into the Library and be engaged in mischief." As they came into the lights of Main Street, she caught a whiff of smoke from a nearby fireplace, and she added the threat of fire to her worries.

Ged's voice comforted her, "You two should be good to get back to your homes from here. I will deal with the police. Don't mention this to anyone, please. The townfolk are stirred up enough as they are."

Maxwell turned and started to thank Ged, but he had already disappeared. Instead, in the shadows, he thought he caught a glimpse of the black cat.

Maxwell dropped her off at her house, just past the snowplow repair shop, and promised to give her a call in the morning. Annapurna stamped the ice off her boots and removed them on her covered porch. She felt the warmth of the furnace heat as she opened the hall into her kitchen and living room and donned house clothes and soft slippers before padding into the living room. She called softly to her mother, who called back from her bedroom that she was asleep, but a snack was waiting for her.

Annapurna fixed herself a smoothie and climbed the stairs to her study. She smiled as the lights came on next to her work desk. Sitting next to her keyboard was a plate of bakarwadi, pastry spirals from Maharashtra, and a folded copy of the Mumbai Mirror, her mother's favorite addictions. While she nibbled the treat, she glanced through the paper, scanning a scheme to distribute saplings and trying not to look at her notebook. On the window that looked out onto the town, flakes of snow started to fall, and she suddenly found tears in her eyes.

She neatly folded the paper and put the food utensils on a serving tray next to the door, and pulled the notebook to her. She didn't need to read the yellow post-it note on top, "Two pages tonight, please, M." She opened the notebook and read the first half page from the night before.

"It was a cold and windy night. A young woman sat at a desk. Besides her were an old phone and an in-tray.

The room was bare, and if the truth is known, a little dusty. A single light bulb shone naked from the ceiling, casting sharp shadows around the room. The woman looked around her, impatience showing on her face. Next to the door was an old and battered filing cabinet scavenged from the train yard below, empty. She scowered at the plastic sapling standing in a pot next to it, casting shadows that could have been spiders climbing across the dusty floor and up the wall.

She checked her watch and sighed. She said crossly to herself, "Face the facts, girl. Your client is late and probably will not show. Like the others. She fought the urge to light a cigarette."

Annapurna fought off the urge to light her cigarette. But it was too cold outside to open the window to hide the smell, and her mother would sleep less comfortably.

Suddenly the lights flickered, and she heard the sound of the furnace below kick in. She sighed as the room plunged into darkness; she would probably need to reset the fuses, and, she reminded herself, get an electrician in to deal with the problem once and for all. She shut her eyes, willing the light to return. She thought of Maxwell and heard the lyrics of an old song swim through her mind:

"Sometimes when this place gets kind of empty

Sound of their breath fades with the light

I think about the loveless fascination

Under the Milky Way tonight..."

She grimaced and tried to kick Maxwell out of her mind. Instead, she wanted to imagine herself as the young detective and that she had promised herself that she would write two pages before she headed to bed.

Involuntarily her mind skated back over the evening. Instead of the detective, Maxwell's face outside of the Library came into focus. She remembered how white his face became and the sweat on his hand as it grasped hers. Then she remembered looking at the little dragon and wondered how the kids had rigged it up. It looked like it was eating a book. Its eyes pulsed with light, and she felt it looking for something. She remembered those eyes. When she had seen it earlier, it had been hunched over, and the eyes had been stone cold.

The sound of the furnace faded, and a touch of cold entered her world.

She shook her head, trying to throw off the tendrils of memory that were swirling around her. The last taste of the bakarwadi faded from her mouth. Instead, she gulped a cold metallic breath of air. The sound of the train to Boston loudly filled the air, and, suddenly feeling upside down, she opened her eyes wide to the darkness. Instead of her soft dress, she felt constrained by jeans and a, from the smell, a none-too-clean shirt and pullover.

Instead of her warm study, she was sitting in front of a cold plastic and iron desk. A single naked light shone above her, casting sharp shadows all around. In front of her, a single door with the word "Detective" etched in the half glass frame.

The cold penetrated everything around her, and she thought of screaming.

Suddenly, someone knocked on the door, and Annapurna stifled a gasp instead. There was the sound of shuffling outside and the voice of an older woman asking if she could come in.

Back in her empty study, words started to spill into her notebook.