This is an evolving series about Australian waterfalls that have disappeared off modern maps. Lost waterfalls: pinched, forgotten, hidden or otherwise misplaced. The goal is to add them back to digital maps (together with pathways) using the tools in OpenStreetMap, Trails and Gaia.

Waterfalls fall off maps for all sorts of strange reasons - but once they do, they start to fade from memory.

It is too easy for this to happen in the modern world.

It would not have been possible in the world of the First People. The First People and Australian watercourses share a solid connection. Rivers and creeks provide rich sources of food and water. They gave the people a unique organizational structure: clan control of valleys and language group control of river systems' vast swathes. Waterfalls, or perhaps, more importantly, the deep plunge pools at the foot of waterfalls, provided permanent water and food during prolonged dry periods. In the higher country, creeks and rivers are important paths. Granite shelves at waterfalls became stone workshops. Water races attracted birthing preparations and rituals.

Pools were named. Some of the falls took the names of those pools. Children born near the pools carried the name of the place as one of their public names.

Colonial settlers were delighted by waterfalls, but did not build the same relationship with entire catchments. European settlers built settlements near permanent waterholes, but not all. As sly shanties became market places and then started to attract townsfolk, some waterfall gorges were destroyed by dam-building, road construction or mining. But, some were preserved and treasured. In the late 19th century these were places for community gatherings and, before the Great Wars, young kids would ride out to play away hot summer days swimming in cool plunge pools.

Lots of falls have fallen through the gaps.

Many once well-known and important 'local' falls have been misplaced. In some cases, the First People withdrew from an area and sometimes the intruding town or rural area died or packed up and left for Sydney. There are a multitude of other reasons. Snakes, uncertainty, sudden death and misdirection motivated by greed or fear each play dark roles in keeping town folk away from particular falls or water holes, as does the relative convenience of new-fangled public baths, the loss of town horses, and the temper of our times.

But, most of all, it is a curious modern malignant amnesia: one where Australians loudly proclaim their virtual virtuous wild credentials but, in the same breath, ignore it in practice.

It is time to reclaim and honor these locations. 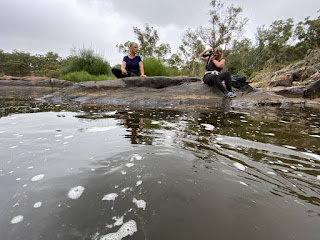 Index (this is a tentative list, chosen to tell representative stories):