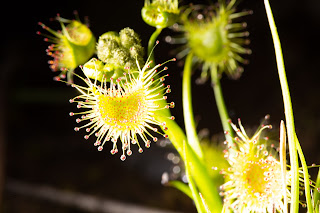 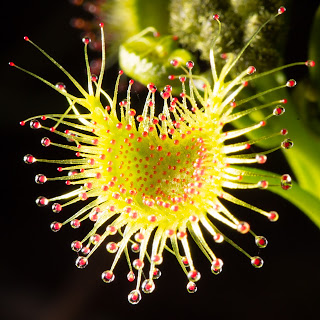 The Australian Drosera (a sundew) is a carnivorous plant which lures and digests insects. The little stalks and their ‘dew-drops’cover each leaf and give the plant its common name (fm Gk δρόσος – dewdrops). The Romans called these structures ‘ros solis’ (dew of the sun) because, unlike water droplets, the drops you can see survive into the heat of the day.

This variety, Drosera subg. Ergaleium, is a tuberous scrambling form. It has adapted to the cool/hot Australian conditions by retreating into a tuber during hot weather.

These are fascinating conceptions. In an 1860 letter, Darwin wrote, “…at the present moment, I care more about Drosera than the origin of all the species in the world.”

This is the first of the season up here in the forests. I found it next to a forest of tiny pink orchids and was torn between the two for a moment.

The temptation here was to photo them as my eye saw them – shiny globules of dew. I got this shot by gradually turning down the flash until the detail emerged – still, you can see the oblong shape of the flash in a couple of the drop.