How many animals can you see in this ancient place? 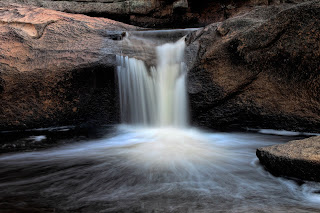 Carved in the walls of many of the remote SE Australian falls, are animal shapes. These are usually in difficult to access places - part way up a fall or on a fall wall. Sometimes the fall is surrounded by a tool workshop of the First People. Stone carvings are not limited to waterfalls - they can be found amidst rocky outcrops or on flat rocks in montane valleys - many exhibiting distinctive local forms. 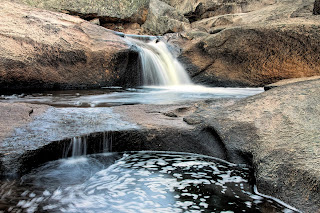 The first dozen times i saw these in the Tuross River, i dismissed them as happens-chance or my over-active imagination.

Now i accept them as deliberate representations of local animals or birds. Here, for example, the dingo/s (a native wolf) ear shows deliberate cutting strokes, while the eyes of all the animals are placed in perfect symmetry to the rest of the face. On the left is the dingo, alone. On the right, from top to bottom: i see a native rat and possum (which may be viewed as a single koala), a wombat and an echidna. Don't get me wrong - it is devilishly difficult to cut these rocks - many of the basic forms are natural. The genius of the carvings are the more subtle (perhaps representing many seasons of work) strokes added to a natural feature (such as an eye, ear or tip of a feather).

This example is from an ancient First People site at Tuross - a place i think of as Wolf and Bears Fall (let your eye wander - look for eyes first and your mind will fit snouts and ears together).

This image was taken twenty paces away, at the top of a larger fall. All around are the regular traces of millennia of stone tool sharpening. 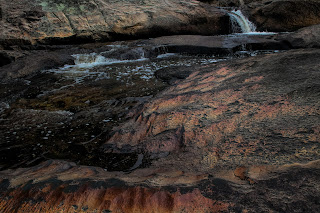 Thank you, for letting me show you these special places.