Theory crafting: Your very own time machine in ten minutes 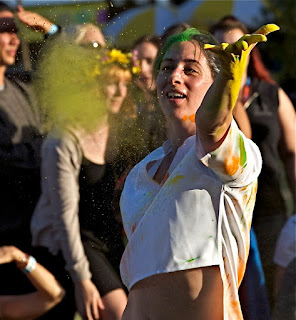 Back in 2016, we all watched, with wonder, pictures of Pluto from the NASA New Horizons probe.
The probe was special for lots of reasons, but perhaps one of its less well known characteristics is that it has been propelled at such velocity as a result of the sling shot from Jupiter, that (as predicted by the theory of relativity) it is now in the future. We are in its past. So, those photos of Pluto came to us from the future.

It is not far into the future (the probe would need to get close to light speed to achieve that), but New Horizons is enough in the future so that telemetry and communications depends on observers taking the slight time shift into account.

All well and done, but what practical application does this have?

The probe is heading away from us, but let us consider two different cases:
1. Assume that the probe, at some time in the future, is retrieved and returned. While now motionless on the floor in front of us, it remains in the future. What we have in front of us is it, as it was, in the past.
2. Assume that the probe slows dramatically and does a loop back to Earth. As it flies close to the Earth, for reasons of safety, NASA destroy it at time T in location XYZ. Note that just before destruction the probe has survived time T and left location XYZ without a problem.

Now, the probe is a pretty special case because it has a lot of velocity packed into it. This has pushed it outside the parameters of the wave that determine ‘the present’ within our own time frame.

When we look a little broader than ordinary physical objects, iron steel and wood, we find some sub-atomic particles that can be given velocity far in excess of the New Horizons probe. Some theorists suggest that here lies the possibility of time travel. Others suggest that instead of velocity, we might deploy the force of gravity. On the basis of such theory, some have started to design elaborate machines with injectors, linear accelerators and black holes. Which are all a bit outside our budget and time today.

Uncertain of the Certainty?
Before going any further, let us just do a quick environment scan.

Why do we want to go into the future, anyway?

There are heaps of really good reasons. It is fun knowing what new music is going to come out next week, who will win the tennis or what numbers are going to drop for the lottery. Actually, it sounds more than fun, it could be profitable...

But what if the future is uncertain?

What if the future we might experience never happens? Let us go back to case 2 above. There is no certainty that the future that might be observed will eventuate. The only certainty is what happens as the current time wave fixes the present into the historic, unalterable past.

So, while it might look and feel real, the future is simply a probability cloud, always being capable of being collapsed or altered in the present.

Still, there may be lots of good reasons to peek into the future, although fun and profit might no longer be primary motivations. perhaps it would be easier to simulate the future, we already spend a lot of time designing increasingly sophisticated models of the future. Some of the models are very accurate, others are junk (like weather forecasts).

So you want to play with Magic?
Not fazed by uncertainty? You still want to go into the future and you are tapping your feet and reminding me that the ten minutes is almost up and we have yet to put a single nail into the first piece of wood.

Consider the first case above. Each of us have been made from the stuff of stars: some bits incredibly old, already pre-stressed with incredible forces at the center of gravity wells or accelerated by the death throes of the last star we called home. Through velocity or gravity, bits of us are already embedded far in the future.

You are already your own time machine. Ok, they did not give me a manual either, and I have never been really sure what the red buttons are for. We all have to work it out as we go along.

No promises broken. I simply said I would have you in your very own time machine in ten minutes. I did not say I knew how to make it fly.
Image: The Colour of Time, WOMAD (World of Music - Adelaide) 2015: A reinvention of the traditional Hindu Holi festival
Labels: TheoryCrafting