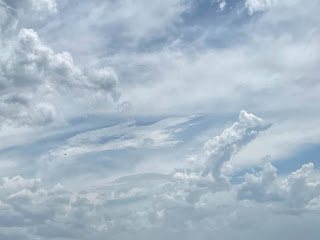 The sun was trying to rise. Indistinct sounds played all around.

Far off, a group of shadows rose and fell in heavy sea mist. The smell of chamomile mixed with lavender and the soft clink of bone china.

The shadows spoke to each other.

"He has been badly hurt."

"I have been watching the Painter. He had been running, his taint evident."

"He is unpredictable and dangerous. I am responsible for giving him the taint."

"So you have said, blood sister."

She paused for a moment. The cold touch of uncertainty descended overall.

I stole ice cream from him while we stood for him to sketch. The ice cream was made with the juice of lemons and limes, with crushed mint.

After he had finished, I held him gently and soaked away some of the taint. He looked at us and tried to understand. Why so casual with your affection?

I explained what it is to be a life partner. To commit to one alone and build a nest, a family, a life history. To learn to sing together and take chances against the dark: to slowly build wealth, power, and influence among the clans. But to not let that poison delight, but to accept the warmth of another's embrace and their songs without regret or condition. To dance with many, lose myself for a moment in the shoes of another, and look into new eyes with hunger and joy. But, just as I would never challenge another life partner, I would not place my life partnership at risk.

The Painter shook his head and said he did not understand. So I asked him to tell me about his life partner.

He hesitated. He told a confusing story about relationships that burnt bright and then cooled into unsustainable forms. Of how at the end of one partnership, another emerged. His life was defined by fractures rather than slow continuity. He told how he had bought the 'White Album' seven times, only to see it stolen away, snapped in half, burnt, or shredded in the cold rage of another failure.

Another interrupted, "Why bring him here?"

"Many creatures hunt him. Even as we spoke, dark eyes were searching for him. But then, the Painter and the Weaver took things into their own hands and created chaos. I had to place him in safety to recover, within the care of a guardian."

"He is unpredictable and dangerous, but not as dangerous as the Weaver. Here, take this ice cream, rich in whole milk, honey, and crushed macadamia nuts. Listen to his dreams."

Too casually, one asked, "And what of the Weaver?"