Ginini Falls are said to be the highest and most inaccessible waterfall in the Australian Capital Territory, with estimates of its drop ranging from 140m to 220m. It is a multilayered fall tumbling through partially obscured and very steep terrain (with the added disincentive of some of the sharpest undergrowth in the country). 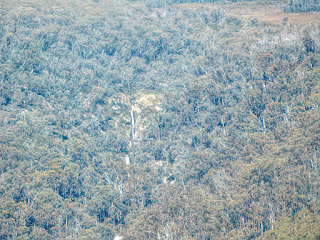 The first detailed public report of the falls came from John Gale, a Queanbeyan newspaperman and one of the proponents of a national capital near to its present home. Enthusiasts followed at different stages, including an ill-fated attempt by a group of young Victorian public servants helping to establish the new capital.

As with many mountain falls, it is difficult to get a clear view of the falls when you are standing in the water itself (a mistake i have made many times). The best point of view shots tend to be from hikes into the wilderness to the falls collected by the ACT bushwalker John Evans who also includes trail maps and cautionary tales.

While circumstances change from time to time, at present there are relatively good views to be had of the top of the fall from the vantage of nearby Mount Franklin - on the walking trail to the summit. Just below the summit (1650m) on Mt Franklin, at an extensive granite platform giving wide panoramic views, the fall can be seen on the slopes of Mount Ginini at 160 degrees South East. The best views are perhaps a little further below this point. Above the falls, to the right, can be seen the Ginini Flats sphagnum wetland which feeds the falls. 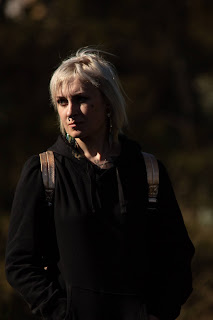 I thank my friend Jack who remembered to bring his Nikon 38X camera along on todays hike to the top of Mt Franklin and Indy for her frequent saves.

During the climbs, we took about 1200 shots of the falls including an hour of video from a range of different vantages, concentrating on full fall images. It will take some time to process all of these images :/   By way of preview, here are two shots @ 5kms with an angular separation of 2.5 degrees. 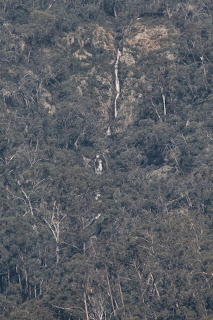 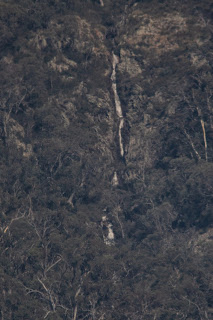