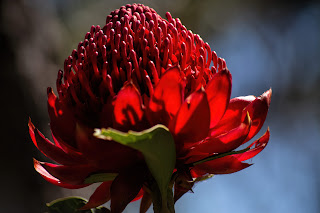 Krubi, a young woman of the First People, made herself a cloak of the red skin of the rock wallaby and decorated it with the redder crests of the gang-gang cockatoo. She loved a young man and, each night, would await his return from hunting trips in a cleft, high above a gorge. Her red clothes were the only object the young man would look for.

One night she learned that he would be trained in the art of war, and shortly afterwards, he left. She waited in the cleft for his return. For seven days she waited in vain, her tears streaming onto the ground of the cleft. She checked the ashes of their fire, but they were cold and seven days old.

So she willed herself to die in the cleft where she had waited for his return at days end. When she died, a waratah formed. Its stem was firm and straight without a blemish, like her love. The leaves are serrated and have points, like his spear. And the flower is red, redder than any other.

The warrior Camoola told this story as a peace offering to the Governor of the Colony at Sydney and presented him with a Waratah.

This dreaming was recorded by the school teacher CW Peck in the late 1880s.

Anonymous said…
I wanted to say something in appreciation of this story and photo, but I have no words.
Monday, October 4, 2021 at 4:37:00 AM PDT

Peter Quinton said…
Thank you Anonymous (no words),
Silence is sometimes louder than words.
Peter
Tuesday, October 5, 2021 at 12:50:00 AM PDT