"And I stand on the crags, and hear the falls
Go tumbling down, through black river-walls" Kendall 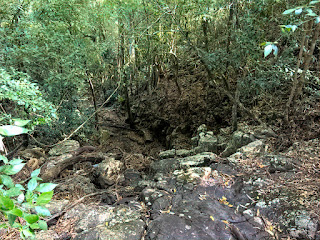 Close to the Pacific Ocean in southern New South Wales, the Currowar Creek leaves a fertile tableland plain and unexpectedly plunges into a rainforest ravine. Or, it would plunge, if there was water. 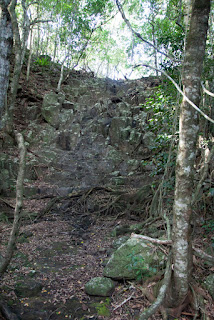 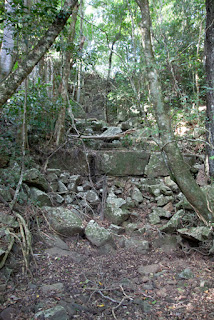 At the base of the first plunge (above, left) , a tree has joined the volcanic base to hold the rocky fall tight. The embrace of the tree can only be seen when the fall is dreaming - at the end of a dry season.  At the base of the third plunge (above, right), massive basalt blocks form the fall wall. I find falls compelling both with (awake) and without (dreaming) water. Both images reveal different aspects of a fall. 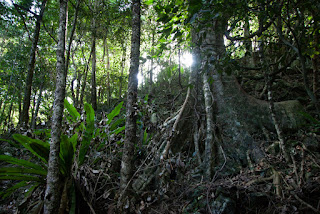 The rainforest ravine was well known in previous times. The First People feasted on the wild foods in the semi tropic and dry rain forests of the ravine. Colonials came to variously marvel at the falls and take advantage of the water left in old deep plunge pools. They took pictures of these gatherings, before the Great War, standing before the waterfalls that dot the gully. ('From Ulster to Ulladulla', Joan Murray Dawes, 2014)

One of the early colonial settlers was an imperialist Captain Percy Hale Sheaffe, born at Wollongong and having commanded a local company of infantry, the Ulladulla Rifles. As a young man he had bought land close to the waterfall (calling his holding Waterfall Farm) and lived there until his death in 1913. He met with the elders of the First People, and came away with two gifts. Firstly, he was given the name of the pools in the ravine - which he pronounced "Yatta YAT - tah", which was said to mean "water tumble down". Secondly, he was given the love of this place, it's falls, fauna and flora, which remained with him until he and a friend, M'Lean, organized the gifting of the ravine to the people of the district.
According to Captain Sheaffe, in early colonial times the area had been known as Armstrong's Forest. Captain Sheaffe said that Armstrong had been a local stockman at a time the area had been a forest. By 1873, when Captain Sheaffe was petitioning for a post office, the forest was gone, but he asked: "in your naming the proposed Post Office, if kindly granted, the retention of the native name by which the locality is also generally known of Yatteyattah, anglice Waterfall from a picturesque cascade quite near the site of the proposed Post Office."

Colonials learned quickly what the First People knew long before: years of heavy rain and storms can be followed by years of parched dry and fire. The signs are on the ground all around us: rock falls, erosion banks and the scatter of riverine sand told the first US expeditionary survey to the colony within weeks that this was a country of extremes.

The types of falls and the changes that they represented inspired poets who hailed from this region, including the great bush poet Henry Kendall. Kendall struggled with alcoholism, poverty and worked close to the land, before ending his days prematurely as a forest ranger 1883-1882. He spoke with intimate knowledge of the beauty and horror of the landscape in its different guises. In one poem, 'The Curse of Mother Flood', his emotions are laid bare, contrasting the tumult of flood years with the dry whispers of drought:

"Wrinkled and haggard the hills are - the jags of them
Gape like to living and ominous things:
Storm and dry thunder cry out in the crags of them -
Fire, and the wind with a woe in its wings."
Like many of us, he clung to the notion that the world was better in former times:

"There, between mountains magnificent, walks bury
Miles of their beauty in green myrtle glooms.
There, in the dell, is the fountain with falls by it-
Falls, and a torrent of summering streams."
In "Watching" Kendall used the image of water falling, to never return, in memory to lost love:

"Like a beautiful face looking ever at me
A pure bright moon cometh over the sea;
And I stand on the crags, and hear the falls
Go tumbling down, through black river-walls;
And the heart of the gorge is rent with the cry
Of the pent-up winds in their agony!"
Other local poets called on Yatte directly (Congenial Conjola, Alex McAndrew, Epping NSW, 1991 p49):

"Do you know those dells with wattles gay
That smell so sweet at the break of day
When the magpies pipe by the silv’ry spray
In the cool cool glades out at Yatte
Then come with me when the kookas call,
Where the fern trees wave by the waterfall,
For there’s joy in the bush for one and all
In the cool cool glades of old Yatte."
Yatta Yatta did not escape the harsh local disputes over water rights, which play out all over the rest of this country. Overgrazing during dry periods leave small streams, which once flowed near the top of the surface, digging down deep into erosion gullies. Those with the means, hired teams of bullocks to dig large dams, to constrain the water (a desperate gamble, for while a dam offers some additional water security, the catchment looses significant moisture loss to dam surface evaporation). In the 'big drys', arguments over water entitlements tear communities apart, and Yatta Yatta had its fair share of these.

Today, memory of the falls is slowly fading, and the area is slowly fading into obscurity. The falls (which dot the ravine) have disappeared off official maps (aided by some confusion about whether the official survey missed one of the lower falls from sitting on private land)- a different sort of dreaming. The top falls of the gully clearly sit within the public reserve.

A sketch of the area from Colonial times 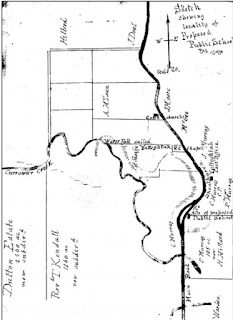 And a modern location map. The waters of the reserve are accessed along a public walking trail which is signposted. Access into the park is across a style (avoid getting tangled in barbed wire by crossing too soon). After crossing the style, continue walking along the top of the reserve until you hit the creek.  There are no maintained trails here - you will need to carefully pick your way along the east bank until you find a safe way down. 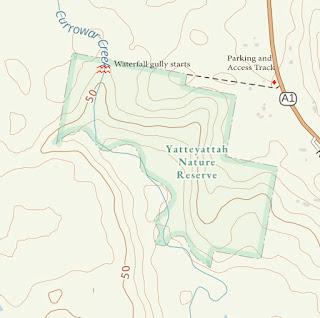 This is #5 in a series of Lost Falls of South Eastern Australia - the Index Page is here
Labels: Falls Lost Falls