The Funnel Web is a large deadly Australian spider, which can bite through fingernails or shoes and can kill in 15 minutes.
Today, death by bites is warded off by applying a snake bandage and getting an antivenom. Both the pressure bandage technique for snakes and spider and the antivenom for the spider were developed by Struan Sutherland in 1980 (after whom the Tallaganda variant is named). 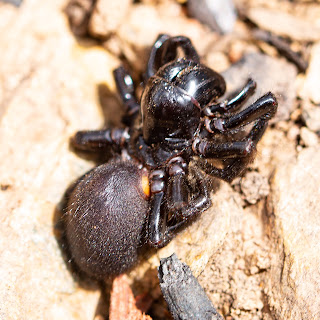 This example was found on an old mining trail. It is not clear whether it was alive (or just in a defensive coil giving it, as with snakes, maximum striking power). This is not a species which should be poked.

Despite the bad press, the Tallaganda funnel web has been carefully studied, identifying six patterns of divergence that might correspond with isolated refuges during the glacial-interglacial cycling of the last 1.5 million years.

The larger females live to 15 years and largely remain in dens. The smaller males wander the forest floor. 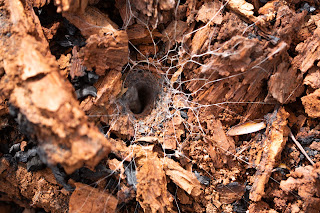 Here, post fire, a den has been built into a fallen tree about 50m from the spider found on the track.