This is the first of a series of posts on flora and fauna within the Tallaganda Wilderness following the devastating 2019 drought and firestorm, and a 2020 deluge. Tallaganda is the First People's name for the creeks and gullies feeding the Shoalhaven River.


On 24 November 2019 the Tallaganda Wilderness started to burn in a fierce firestorm. Within five days, the fire had engaged the southern part of the wilderness. 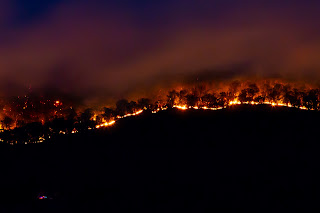 It seemed that nothing would be left. 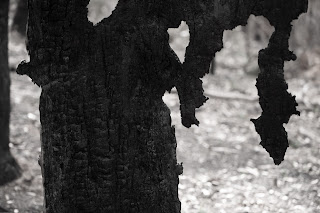 Much of the wilderness has been closed (including common access points) because of the extreme danger posed by falling trees in the fire zone. However, i am able to hike into the remaining unburnt forest and an adjoining area of fire affected forest outside the prohibited zone with a group of local land owners, to conduct a side-by-side assessment of wildlife in both zones (on the basis of 'leave no trace' hiking).

As at this update, two surveys post fire have taken place in the vicinity of the Southern Tallaganda Eucalyptus Still in the Mulloon Creek (sometimes called Long Swamp Creek - a reference to the highland bogs in the area) tributaries:
1st survey: 24 February 2020 (creeks running)
2nd survey: 2 March 2020 (creeks barely running after warm days)

Keeping to defined tracks and rocky ground, we follow a deep loop along fire trails and an old mining trail giving access to creeks and waterfalls unseen for decades hidden beneath tons of invasive weeds (esp. blackberries and serrated tussock) and conduct a preliminary assessment of species damage and recovery. The results might usefully form the basis of submissions about the management of the wilderness area i am providing to the Australian Risk Policy Institute.

It is now a month on from the declaration that the Tallaganda Wilderness fire was out (and perhaps 2 months since the fire ravaged this area). There is some regrowth in fire affected part of the forest. A list of species encountered is included below and will be added to over time.

We have encountered a couple of significant surprises. One shock was the survival of species, seemingly untouched by the inferno that burnt around them. The temperature of the fire at forest floor level in the zones examined could have varied from a high of 1,000ºC in the mountain ash – peppermint gum zone down to 600ºC in dry creek bed areas.

Exocarpos cupressiformis: Native Cherries, a form of Sandalwood which looks like a cypress, survived the inferno. It has needle like leaves which can bear a heavy crop of fruit with the cherry ‘seed’ on the outside of the flesh.

The tree is not well understood, often being mistaken for a pine. It is commonly thought to be a parasite on host eucalypti, but this is clearly not the case with established trees. It is also believed to be poisonous to stock, but there is no proof of toxicity. The (edible) seedless cherry is sometimes suggested for cultivation, but this has not proceeded.

On the second survey we observed a Southern Boobock Owl rising from a Native Cherry and observed signs of nesting in the tree.

Asura cervicalis: Within the safety of these trees, pollinating moths have also survived. The Asura cervicalis are usually observed eating trunk lichen off ficus, acacia and eucalyptus species – here they are colonizing the Native Cherries in the post-fire environment.

In progress as we work through the identification process (of 60 small shrubs, only a handful have been identified - some will need to await flowing). Note that links, where included, will take you to relevant pages with images. Not all species here have been imaged in the two field excursions to date.

Thank you for being such an inspiration and showing the world these little miracles.
Monday, February 24, 2020 at 9:53:00 PM PST

Thank you for being such an inspiration and showing the world these little miracles.
Monday, February 24, 2020 at 9:55:00 PM PST