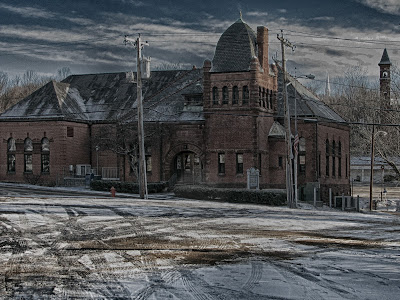 "Gonna level with you, buddy; I have no idea how to respond to you."

The police officer put the thought of coffee cooling on her desk out of mind and wondered whether it was time to resort to more direct questioning.

Instead, she said, crossly, "Stop whimpering! I heard every word at the diner. Your goose is cooked."

Ray was in a miserable state, slumped over the interview desk, choking on every second word, "It's just words!", he managed.

The police officer shook her head, "No. No, Ray. Can I call you Ray? It's not just words when it is about..." She took a quick breath and said meaningfully, "... killing someone." She waited for her words to sink in, and asked conversationally, "Do you see my point, Ray?"

Ray begged piteously for his notebook back, but the police officer said, "No, Ray. Your ‘note’ book is now evidence." She gave a little shudder about the evil she had read in it in just a couple of seconds scan. It was enough to suggest that the man who sat across her was a mass murderer of biblical proportion. Ray howled a truly miserable sound, as the police officer sat back, and wondered how many promotions this find would bring her.

Just then, there was a sharp rap at the door. Ray stopped wailing and looked up fearfully towards the door.

She couldn't help thinking that he ticked all her boxes as a multiple murderer: white, male, middle-aged, slightly overweight, educated, a checkered shirt with an ill-fitting jacket, no smokes, lots of credit cards in his wallets, and he cried the moment he was put in an arm bind. The only thing he had fought to keep was his notebook. She thought wryly, "for a good reason".

She pushed her chair out and walked carefully, backward, to the door, "Don't try nothing."

He swallowed a sob and helpfully corrected her, "Anything."

She broke. Two wild steps and she was over to him and clipped his ear as hard as should without leaving a bruise.

He screamed in pain.

Her hand stung too, but it was good pain.

She again heard the insistent knock on the door and spat silently "Filth" in his direction as she made for the door.

She imagined extracting confession after confession from him. She nodded to herself, "It was always the quiet ones, the ones you don't suspect."

Betty was locking up for the night when she heard a knock on her door and opened it to the town police chief.

She looked at him with surprise and then a clench of fear.

He met her eyes and said quickly, "We have to talk."

Inside, she made a pot of tea, and they sat facing each other.

He outlined his concern without the need for any pleasantries, "My officers arrested a couple of members of your library's writer group tonight, on charges of attempted murder."

Betty stifled a gasp. She shook her head, suddenly worried for all around her and the town.

He continued, "The thing is, there are no bodies. No victims. But everyone is shook up, and I need you and me to calm 'em all down."

The police chief was, of course, simplifying things a little. One of the police officers had a deep, unexplained scratch down one leg. Toby McFarlane was dead in the front seat of the old Buick they pulled out of the river. City Hall had arrived just in time to see the rest of the wall collapse. And no one was happy about where things stood.

Betty looked at him and said, "Writers?"

His faced creased, and he nodded.

Betty shook her head and sighed, "Writers are so much trouble."

Bob started, "My officers hear your writers talking about killing a woman called Bernice." He asked hopefully, "Do you know a Bernice in town?"

Betty thought long and hard, but not about Bernice.

She said, "Your officers heard a couple of writers talking about books they are writing in Toni's Diner?" It was a guess, but it fitted the facts.

Bob shuffled his feet, "I need you to come to talk to them, and calm them down. I will bail them to you, and we will let things quieten down over the next couple of days. Then we will drop everything unless we find something was happening here."

She said directly, "What happened here, Bob? Spit it out!"

He said directly, "I am not one for telling stories about things I didn't see." He stopped momentarily worried about his tense, conscious he was in the company of someone who probably knew what the right word should have been. She gestured for him to continue, "But the last couple of week have been tough on everyone, and all my people are on edge."

She nodded, "Me too. Some strange things have happened. Maybe just kids. Or animals." She paused for a moment, "Give me some examples."

He said, "Maybe kids. Stupid things. All the teaspoons have been pinched from the diners — every one of them. A couple of power poles have been brought down around town. Something has been pulling the tires of wheels."

Betty sat very still, "I don't think any of those things are silly."

He asked, "Will you help me calm things down? I think my people over-reacted."

Betty said, "Those writers had no business causing a fuss and diverting the law from its proper purposes. Drop the charges now, and no lawyers need to get involved. And I will have a word to those who need to know to stop this happening again."

He shook his head. "Hard bargain, but let's try it."

To be continued...
Labels: Novel