“In seeking Happiness I have found Imagination instead. Go away, I entreat you by the gods, and close the door behind you for I do not want you. But you have come according to your old fashion. I am not angry with you: only go away.” (Meditations, Emperor Marcus Aurelius Antoninus) 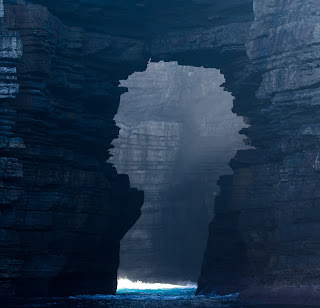 The world is a beautiful place. This is one of the more secret and dangerous bits.

Imagination is usually contrasted with reality. Near ‘power’ the world warps slightly under the weight of flattery and selective vision. Perhaps is our only defense. You need imagination to see the world as it is rather than as those around you wish you to see it.


Aurelius does not contrast imagination with reality. Instead he contrasts happiness and imagination, unexpected but compelling. I delight in his inability to lock the door against this counsel.
When I glimpsed this visage I thought briefly of his problem. Not even the greatest lock can keep imagination at bay.

Once, a long time ago, a guide with a deep love of this place (Point Perpendicular) spent some time showing me some of the amazing structures along the coast: massive rock ramparts, beautiful waterfalls, underwater caves, arches and secret gorges. It was like discovering a whole new world.

Part of me tells me how this place was formed, through the slow erosion of the cliff face through the relentless action of the 2-4m waves that beat down on this part of the coast. Unbidden, another part of me drifts in other directions. When the sea level was lower, did this structure exist, and did animals and plants colonize the shelves? Did hominids walk here? And would not this be a great place for a dragon (and that is when I hear Marcus Aurelius's sending off his own dragons).

It invokes another story told by Helen of Troy in the Odyssey that I struggle with. In the final stages of the war, Odysseus dresses as a beggar and comes into Troy. Helen sees through his disguise but chooses not to reveal him, although he goes on to steal the Palladium, the Luck of Troy. Helen sees through his disguise a second time (with the other Greeks when in the wooden horse) but no one listens to her. This reminds me of an ancient citadel, a place for those stories.

A place that lets the mind drift, and stories recombine - that is a dangerous place indeed.
Labels: Short Story