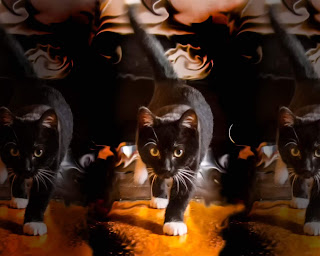 With a squeal of rusty hinges, the black cat left the library. It slithered and backed its way down the wall, shrugging off a snowflake as it disappeared into the night.

Moments later it pushed its way into Toni's Diner and bent to a bowl of warm cream in the kitchen. Suddenly, its ear pricked up. Alert, it turned to look at the row of tables.

At the end Jess rose with a frown to meet Ray, "I am glad you came. Can I get you a hot chocolate?" He nodded, and she called out to Toni.

The black cat turned back to the cream, unsure. The cream tasted sour.

Jess said to Ray, "I have a problem."

Toni arrived and said, "Be with you in a moment. Just feeding the squad car, they had a car off the bridge tonight and are a bit shook up."

Ray took out a scrap of paper and made a note, saying, "Sec. Need to jot that down."

Ray finished and said, "You told me. But I have my book to write. I still have 900 words to write tonight and..."

Ray said, "We have talked about this. You have to kill Bernice."

It was a little too loud, and the conversation in the diner dropped perceptibly, so he added loudly, "Bernice, the character in the book you are writing," He stressed Bernice and writing. Both of them waited for the diner to fill with normal disinterested conversation.

Ray sighed loudly, and whispered loudly, "We have been through this. Look. Killing a character is hard. It took me weeks to get the nerve to kill my first one. But a bit of practice and, you know, it gets effortless. Before you know it, you will be killing off whole families, little children, cities, kittens!"

Jess looked around worriedly and nodded silently at the police officers sitting a couple of tables down, and whispered loudly with a gentle kick under the table, "Don't say 'kill.'"

Ray said, cautiously, "You have to do this Jess!"

Ray had had this conversation a couple of times, and his patience was wearing thin. He looked at the police officers, who had stopped eating. "Here. I will show you." Ray moved his hand in the air theatrically and hushed Jess. He brought out a piece of paper. "Watch."

The Black Cat silently jumped up on the seat back behind Jess and peered down at Ray.

Ray wrote, "Bob finished putting on his tie and picked up the flowers he had bought earlier." Ray explained to Jess, as an aside, "See, the flowers make him a character of value. When we kill him, the reader feels a loss." He nodded his head, silently asking her to agree.

Ray said, "It’s alright Jess. It will be all over shortly. It is just words." He continued to write a little faster with every word, "A block of ice fell onto a nearby wall. A dislodged brick shifted imperceptibly and lost grip of its neighbors.” He looked at her, and wrote one more sentence, “Fate hung in the balance."

Ray wrote, "Just then, Ray slammed the door, and walked to his appointed fate."

Suddenly there was a crash outside the diner. The cat jumped onto the table, dislodging Jess's manuscript and for a moment chaos reigned. Toni stomped out of his kitchen with a soup ladle, opened the door and peered out into the night. Toni shook his head, "Careful when you leave tonight folks; another brick has fallen off that dratted wall." He called out to the police officers, "Can I put in a complaint about that?"

One of the officers called back, "Come on Toni. You know the drill. Call City Hall."

Jess called to him, "When you have a moment, can we have a couple of hot Chocolates please Toni?"

Toni turned and shot a smile at her then shook his head.

Jess and Ray finished getting the papers back into order, and Ray turned back to his exercise.

Ray held his hand above the page and froze. Written on the page, under his writing, in a narrow painful text, were six new words he had not written, "The brick fell after he passed"

Ray looked at Jess and then looked back at the writing, vaguely annoyed at the lack of a full stop. He looked at Jess again, and his eyes narrowed. Jess said, with a rush, "I have been trying to tell you."

Ray asked, pointedly, "Did you write that?" He pointed to words, which had been inexplicably joined by a couple more and some punctuation. It now read, "The brick fell after he passed, and just after he sat down" Still, there was no full stop. Ray suddenly felt cold.

Jess shook her head, "Listen to me." Ray shook his head and put his hands out. She pulled out pages from the top of her manuscript and put it on top of his note. "Look!"

She pointed to her writing and, just as he was about to remonstrate pointedly about the incomplete sentence now in his example death scene, he noticed the same narrow painful text on her page. A hasty thesis formed in his mind and he blustered, "What are you doing!"

Jess simply said, "I don't write like that. Something else has been writing in my story."

Jess said, "I sat down to write tonight. After my talk with you. I told myself that tonight was the night I was going to..." Her voice trailed off. "You know..." Her voice dropped to a whisper, "Kill Bernice."

There was a hush in the air.

Ray's eye caught the eye of one of the police officer a couple of tables away, who had a ham and tomato burrito in his mouth but still finding time to look at them with a little too much interest.

Ray's heartbeat got louder and started to pick up the pace, "Ok, ok. Let's not put the other people here off their food. Let me read what you wrote."

He started a couple of lines about the strange text, "This time Bernice had gone too far. She had slept with his girlfriend Meg. She had abducted his cat. And she had burnt their office to the ground. He had no options left. She was going to pay for all the bad things she had done. He gunned his car once more and waited for Bernice to leave the club."

Ray stopped at that point and looked up at Jess. They had been reading each other's novels for a while now, and Ray had thought he had an idea about Jess's plot and the character development in her story. They had spent a little time on Meg, the clothes she wore, the cigarettes she preferred, her weakness for Dutch licorice. But nothing hitherto had been mentioned about Bernice sleeping with Meg. Ray felt a bit blindsided by this development, and by the inexplicable lack of another full stop.

He started to point, but this time Jess got in first, loudly, "I have been trying to kill her all day! I blew up their office. I fixed her car so it would spin off the bridge! And now..."

The policeman standing next to her with her gun drawn said, "Now?"