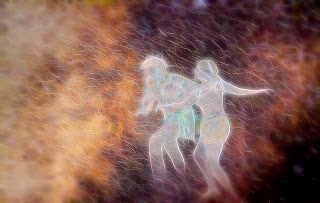 She drifts on the tides of history

When men first see her, they seldom believe their good fortune. Lost, vulnerable, in need of everything a man could give, she inflames their desires, responds to their touch, and bends to their dark, same, wants. But when time comes to discard her bruised body, they find themselves bound, and then drained, and then consumed.

Time after time, she feasts on the dreams and passions of these men, and then wills them to be no more. At first she delighted in their simple dreams; the dreams of men who study the currents and farm the sea. But as she savors each new find, less succor she gains from their shared same lives.

Until, by accident, he comes into her reach. A thief. Far from home. He twists in her gaze with desperate stories from other worlds. As he sings to her of places far distant, he struggles in her web, fighting for his freedom.

She pauses, unsure. Drawing him close, he offers to close her wounds, and protests his affection, while he hunts for his escape. While confused she smiles and ponders her decision.

During the first days of his captivity, he started to tell her the seven stories of the world, singing her the songs of the sky and showing her all he knew of love and war. But as yesterday became today, his diversions cease to be a game.

One night, as the stars swept over him, she stands beside him as he slept. Suddenly she plucks him from the world, from the past, and drags him into the future.

Index to the Stories

A note from the Author:

So starts the novel "Freyja: the Seven Stories of the World" which has remained in flux since i first started writing it at the base of Katoomba Falls, after the great fires, a decade ago. I have consigned a couple of earlier drafts of this novel to the fire - hopefully this present version will survive through to publication.
In the form presented here, the identity of Freyja or the Thief are not important. In the novel itself, they are players in an immersive on-line multi-player role-playing game, and are both deeply invested in it. Like many of our youth, the game has become more important to them than real life.
The role playing game imagined by the novel is based on Nordic myths (there have been a couple of on-line games based on these, but the novel draws no links to any of them). Through dint of hard work, Freyja has worked herself to the almost-pinnacle of the game as the goddess Freyja. The Thief, similarly, has achieved high rank, and is cast in the role of a protagonist to Freyja.
The story is a conversation between Freyja and the Thief who are sometimes presented as two lovers, sometimes as antagonists or, perhaps if love and hate are simply interchangeable sides of the same coin, just emotionally entangled.

Some argue that there is nothing new in the world: that human stories are based on a couple of basic stories, different only because of the fancy clothing or props. Perhaps there is some truth in this: part of the joy of listening to a good yarn is the uncertainty and thrill of anticipation, whetted by a lifetime of listening to similar, interesting tales. Roots back into the certainty of proto-stories create balance. But, too much certainty is a yawn; too much uncertainty is unsettling.

Modern pop culture would have us believe that the story cycle can be reduced to three proto-stories:
- boy finds girl
- boy gets girl
- boy looses girl.
Sometimes the gender changes, and sometimes the order gets mixed up, and yet, still, silly love songs, poems and novels based on this simple formula fill our lives. Even so, if this were all, we could dream our lives away without really living.

Freyja was written around a cluster of stories that date to the earliest days of the human diaspora, and garnered from places where it is still possible to hear the echoes from the past. The stories themselves are based on seven thematic subjects: Chaos, Order, Living, Limits, Naming, Reality and Insight - and this first fragment demonstrates how each element are perhaps essential to most stories.]

Ignore him. Listen to me.
You and I are different and the same. I wear a wolf totem to remind me of the fragility of life.

But I write not by way of explanation nor apology, not here.

Hush! There is no need to say any more. I will not make this harder for you, and I will understand your silence from here on. I think all we did was to try to keep alive a dream that all of us once wished for, and which all of us kept hoping for, in our own different ways. We did it the wrong way. With just a little hindsight, all the hurt could have been avoided.

This tale is neither non-fictional nor biographical. Instead, I write only to bring a smile to your face as we wait for the end.

While we wait, I will try to answer an old question. So old, so obscure and so perplexing. I first heard the question from a friend I met as we walked the border. His name isn’t heard much these days. Snorri is, was, his name.

I see a glimmer of a smile at such a strange name. Surely he is one of Tolkien’s inventions.

No, he is a real man. He is a “law speaker” from the Icelandic Commonwealth. Not a dwarf. It is now nearly a thousand years since he died in his cellar, but I make no claim to be so old. “But how, and where”, I hear you ask. “Not here, not yet”, I reply

Snorri, a learned and confusing man, only asked one question so far as I know. He asked, “What is a wolf?”

No. Not the real wolves that hunt in the real forests. He asked what the nature of those other wolves was: the wolves that sometimes take human form. The wolves that sit and pace in the shadows of our despair and loneliness.

This story takes seven days to tell. Maybe seven days or maybe a full moon month. Maybe I will live long enough to finish it, and maybe I will not.

The story should start on a Sunday; Dies Solis in the tongue of Rome. But you are impatient, in deference to you and the other gods I will start today on Tuesday, part way into the story, and come back to the beginning, in my own time.

Less you forget, I have told you some of my his-story in an earlier life. But then I did not know why I have to write nor the answer to the question. And because all things fade in time, I will tell this story complete, if not from the start.

And so I shut my eyes and time drags me, unwilling, into that day the old people had no name for. When they called it anything it was with its Roman name: Saturn’s day, Saturday. A day reserved for the church, and the dead hand of an empire lying in ruins, far to the south.

Saturn’s day commemorates none of the old gods. It is a day that in its silence speaks loudly their absence. But this a story about the last days of the gods and wolves and in the quiet of the day that commemorates only their absence we can afford to ask Snorri’s question one more time. Who are, were, they?

And so I am almost ready to start the telling of this story. But wait. I have not mentioned one of the players in this tale. There is another, hardly important. A shadow of a man. A thief and liar, someone lost, far from where he started. But he is not important, so we will give him no name.
Labels: Novel