Freyja: The Seven Stories of the World: [7] Insight 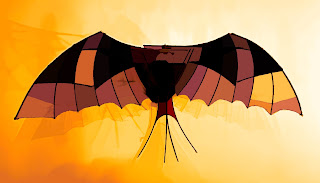 Zephyrs race across the sky from the west. Thunder and lightning dances around them.
Freyja flickers beside him, the smell of lightning in the air.
The Thief said, “A storm. It may play havoc with our connection.”
Briefly, he tries to interest her in the poetry of Omar Khayyam until her image starts to blur. The cat watching them arches her back.
She says, “Enough metaphysics. Tell me tonight’s story.”
The Thief tells her his seventh story, on the day they called Monday, in honor of the Moon, who is chased by the wolf Hati.
The Thief speaks:
Through the valleys below, the older people followed the old footpath for a millennium. The same paths: shared by the people, the animals, their spirits, and their wolves. A network of trails, unchanged save for the occasional detour to avoid a tree brought down in a storm or a creek that had flooded its banks: paths used for travel and hunting and burning and trade and war. Trails used by Kadaitcha, hunters, gatherers, children, and lovers alike until they were adopted by the shepherds and surveyors and mail deliverers and road builders, and now the chariots of our own time.
As the first people walked, they told stories.
We still crest each hill at the same point as the ancients, and their spirits view the same landscape of hills and creeks through our eyes as existed far into the past. And we still listen to the old stories, just wrapped a little differently each time.
Below, the mists start to resolve into forests and towns. The path becomes a highway.
{The Thief's words begin to run together.)
...
Afterward, the rest of his story shimmered out of her reach.
Freyja remembered shreds. Something about insights from holding on to the past. About the story written by Cervantes. The story of Don Quixote de La Mancha and his tilt at reality. The Thief said that it had owed its origins to convulsions challenging to comprehend.
She had vaguely remembered Don Quixote, the mad Spaniard who thought himself a knight and tried to battle a windmill. The Thief had reminded her:

“When life itself seems lunatic,
who knows where madness lies?
Perhaps to be too practical is madness.
To surrender dreams — this may be madness.
Too much sanity may be madness —
and maddest of all: to see life as it is,
and not as it should be!”

He told her that Cervantes’ genius created the first modern Western novel, a story of stories. However, his book was based on a far older work. Scholars of the Andalusian kingdoms had discovered, treasured, and translated an old comedy written by Apuleius, a Nubian from the age of the Roman Empire about the Metamorphoses of Lucian, a scholar from an ancient city in Algeria. It, too, was a story full of stories. Apuleius’ Metamorphoses was, in turn, taken from an old Grecian account written by Lucian of Petra, an ancient Grecian city-state. So, the Thief said, the world’s first modern novel was based on an ancient story.
She had complained that a recounting of academic research was of no interest to her and demanded a proper story. The Thief told her that all the stories of the world were reflections of earlier stories and that he had nothing but ripples to offer her.
Freyja shut her eyes. When he finishes speaking, Freyja shook her head and glares at the Thief. She feels split between three places: her dread hall; her home in New England; and this place, his farmhouse. None feel real. She wonders why she dreams of the end of time.
Suddenly her eyes widen. She demands, “What did you come to steal?”
The Thief looks at her. “You. I stole you.”
Then he fades while Freyja blurs and shifts shape, flickering in and out of reality.
Everything fades.
...
Then the world ended unexpectedly.
Freyja waited for it to restart. She recalled that the connection had been tenuous and slow. So she took all the usual paths. She queried the world servers, but they were all unresponsive. She reached out to the world community, but the forums were silent. She glanced at her private feed and was confused by a torrent of angry messages. She read a couple at random, all demanding that she wake up.
Freyja took off her VR goggles and headphones, and became the woman Anthem. Away from the worlds of the net, it was dark and cold. An owl called in the distance. She stood unevenly and felt her way to a light switch. She kicked over the furnace and waited for the warmth to start to radiate through her house. Deeper in the house, her phone was flashing a large number of unread messages. She found her way into the kitchen and fixed herself a cup of warm milk.
Then she went into her darkened entertainment room and lay on a couch. She wondered at the unfamiliar touch of her couch below her; her sofa in her home. She thought about switching on the TV or playing some music. Instead, she slept.
She dreamed. In her dream, she stood frozen, awaiting an approaching storm. In front of her, soft light falls through the window onto an open book. She shimmers in the reflected glow, alone. Low thunder rumbles in the distance, and she reaches out to the book. Blue light jumps between her hand and the book. In her mind, she again remembers the Thief’s last story to her. The memory of him appears before her.
She wakes alone. She touches her face, just a face. After a moment, she pushes herself off the couch and sneaks through the house, ignoring dirty plates and incomplete housework. She craves real food. She pads upstairs and takes a shower and changes into clean clothes. Outside, she jumps into her jeep and drives to the town center. It was early, and the supermarket ignored her.
Back home, her home, she sat and tried to remember that past week.
Before her, a hundred images twist. The God of Justice and the great wolf Fenrir argue on the fields of Asgard. In the icefields, the Bone Woman pursues the heart of her man. In the tangle of undergrowth, a gentle spirit lies, dying while the Lomatia's winged seeds rise into the air. On a cold gravesite, the spirit of the scientist Dawes watches his lover Patye dance in the fire of the sun. Against a parched sky, fire trucks drive towards clouds of smoke.
She shook her head and scraped butter onto rye. Coffee steamed with a taste of hazelnuts and half & half.
She remembered that night, as the stars swept over them, and she stood beside him as he slept. Shimmering, all around, the ripples of the world.
Index to the story cycle

You have been reading an abridged version of this story. The full novel will be available shortly on Amazon.