Freyja: The Seven Stories of the World: [1] Chaos 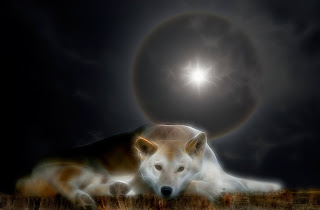 Invocation
Touch the spinning thread of destiny,
Rejoice the portion racing past your fingertips,
Relish your life in fair wonder with others,
Until the great destroyer takes us back, whence we came

Freyja touched the Thief’s nose and calls for a story about her, told to her. She leans back, her eyes, wide open.

A story told to her, where she can see her eyes and no one else’s reflected in his. So, he told her this story about the coming of the wolf age. But her eyes dimmed as the night deepened, and fell asleep asmile.

This is the first story the Thief told Freyja.

On the day called Tuesday, in honor of the god of justice, I will tell you the oldest story humans know. It takes many forms, but I will tell it to you in the way the Northern people retell it around warm hearth fires in the grip of winter.

I learned this story around Garmr’s fire. Garmr is chained to the entrance of the Underworld and draws his power as a story teller from watching and querying the dead.

The story is about Fenrir, the most powerful of the wolves. The story crackles with its own power. Each retelling changes the world, sometimes more, sometimes less. Simply retelling it draws unwelcome attention.

(Yes, she is here too, trying to stay awake. She asks sleepily, “Which wolf are you?” and he shrugs.)

This is a hard story; a lesson in failure. A story of the frailty of purpose. You tell me you will stay awake deep into the night to hear the story. But I know you will not. While your eyes swim in mine as I start, others watch as yours dim. Others watch as your purpose fails and you finally fall asleep, while I tell you the story about how justice fails.

Garmr watches the nine worlds. High, three cold worlds are the province of gods and alfs. Lower, three warm worlds are the home of giants. One, Middle Earth, is also the home of men. Lowest, three hot worlds are home to dark creatures and the dead. Garmr is captive to the ruler of the lowest of the worlds, Niflheim. Hel is her name, daughter to a past companion of the gods, Loki. She is half radiant beauty and half malignant decay.

From his cliff, he watches for the end of the life cycle, for the death of all things. His task is to meet each of dead, human or other, stumbling into Hel’s domain. He then moves them on, to the ranks of the army of the dead gathering around Hel. All those who die an ordinary death, away from the glory of battle, come here.

Past his post is a confusion of footprints, leading from the graves of the dead. All the footprints of dead humans start at graves in Middle Earth.

Follow the footprints of the wretched dead back from whence they started. In the barrows of the dead kings scattered in the steppes of Middle Earth are treasures beyond our understanding. Here are the instruments of war; there are the baubles they lived and died for. Here are the great named swords, created by sorcerers to bite or parry. There the bulwarks, some smashed, some untouched.

Look closer and patterns appear. Stitching in a leather helm, betray the movement of a hand from long ago. Shining rocks collected far from here; brought by trade or deluge. Though the voices are stilled, there are stories here.

See the small statue, a male with one right hand missing, in this barrow. Another without a right hand in that grave. And those in others almost beyond counting, even in the pauper’s scrapings. The same deliberate pattern, repeated time after time.

The statutes look like a man, but they are actually a god. He is an old god, ancient beyond remembrance. Yet we still honor this god: Týr. We honor him with the name of the day Tuesday.

Týr was known to the tribes of Middle Earth as the god of war and justice. Originally one of the more important gods, his primacy faded as the tribes fought their way into Europe. But not completely.

Tonight, we remember him as the god of justice. When war fades, justice becomes central to the notion of civil society. When justice fails, civilization descends back into war and strife. Týr is implacably opposed to chaos, the enemy of justice. And his greatest challenge is upon him.

The three children of Loki by Angrboda were fearful beyond imagining. We have already met Hel, who strives to control the three lower worlds and builds each day the army of the dead. Jörmungandr, the Midgard Serpent encircles the three middle worlds just out of reach of men and alf. Now, on the fields of the three upper worlds, the third child, Fenrir runs free and has grown large playing with the children of the gods.

The older gods fear Fenrir. He has taken his mother’s form as a wolf of the Ironwood. In the god’s fear, they agree that Fenrir cannot be allowed to reach maturity. He must not challenge them for the rule of the last three upper worlds.

The gods first turn to the dwarfs, who construct a chain of iron to bind the great wolf. The chain fails at the first test.

The dwarves labor to construct a replacement far stronger, which fails as well.

The gods turn to the dark alfs, who construct a different chain. Like sentiment, this chain binds tight but is made from the most intangible items we can imagine: the sound of a cat’s step, the beard of a woman, the roots of a mountain, bear’s sensibilities, fish’s breath and bird’s spittle.

Fenrir has suffered the gods testing his strength with chains twice. He has no need to prove himself a third time. So now the gods turn to Týr, the God of Justice.

Týr, the champion of justice, is opposed to only one condition: chaos. Like the alf’s new chain, Týr weaves his law spells in the most intangible way with appeals to fairness, remembrances of peace, and foils designed to blunt the fiercest blood. The chaos of revenge slaughter is replaced by the golden threads of the law: juries, summons, applications and adjudication before courts of respected community members.

As he approaches Fenrir, Týr sees his old foe instead and feels the cold fear of approaching chaos. He pledges his word as the God of Justice, that if the chain binds, he will remove the chain. This is a pledge he must not break. He cannot break his word, without unleashing chaos. For, how can the promise of a mere mortal be expected sacrosanct if the God of Justice holds such promises worthless.

Fenrir weighs the risks and as an added security takes Týr’s right hand into his mouth.

While the chains of iron were easily broken, Fenrir cannot break the new chain. This should not come as a surprise. Our world is bound in chains of sentiment. We are all bound by the most intangible chains and these chains bind us tight.

(He turns to her, her eyes wide shut. Breathing softly asleep asmile.)

Here the story should end: the noose slipped and Fenrir, beaten and humbled, freed to take his chances in a changed world.

This is the moment, the point at which everything is in balance. It is now that the gods could break that terrible path they tread towards their twilight. Here is the point justice could prevail. Fenrir has broken no law and justice demands no penalty. Fenrir has just learned that he is not invulnerable.

He appeals to the God of Justice for his freedom. It is his right. That was the bargain.

The God of Justice weighs his options. He has broken Fenrir; no longer is he invulnerable. But Týr looks at Fenrir and sees chaos. So, instead of honoring his bargain with the wolf by releasing the bonds, he chooses to break his word and draw the chain tight.

The loss of Týr’s hand is the least damage done here. While the threat of chaos in the form of a free Fenrir recedes, the intangible rules of justice start to unravel across the world, as bargains between gods and between humans are set to naught. And chaos is unleashed.

“It is harsh in the world, whoredom is rife; an ax age, a sword age; shields are riven; a wind age, a wolf age; before the world goes headlong. No man will have mercy on another.

Do you still seek to know? And what?”

Across the steppes we find the discarded statues of the old god of justice, one hand missing. A reminder of how chaos follows the failure of justice.

The wolf Garmr had pledged allegiance to the gods and accepted domestication. For this act of loyalty, he was chained by Loki’s daughter Hel.

At the time of Ragnarök, it is fated that Garmr holds his deal with the gods at no value. Instead, he will join the giants in their fight against the gods and will leap at Týr’s throat. They will kill each other

The night is silent. He feels her body move gently next to his. He hears her gentle breath. But in his eyes now swim other fires. Those eyes stare at him from afar, wild and dangerous, unforgiving.

“Come back to us, to Middle Earth,” they call as the first rays of light touch his hair. A wolf howls to her pack in the cold wastes outside the hall as the wind suddenly whips through the trees outside, clearing the clouds.