The Illawarra rivers meet a relatively narrow coastal plain after plunging down the coastal escarpment. While most do not run in dry times, they can put on a spectacular display after heavy rain.

The features of the area were early studied by an impressive group of early European settlers and visitors (eg Rev Clarke and the United States Exploring Expedition in the Pacific under Commander Charles Wilkes, with the famous mineralogist, James Dwight Dana). Some of the waterfalls seen by the travelers have been submerged in dams. 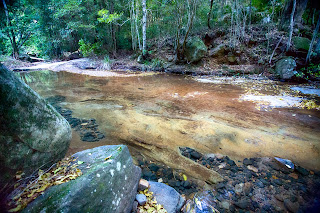 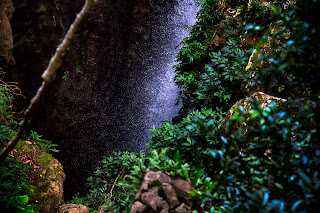 A short walk along a maintained path at the base of Macquarie Pass will get you to a 20m (60') fall into a decent pool. 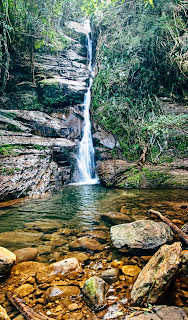 The walk to the falls passes a number of other falls and will take bushwalkers higher to swimming holes and falls. 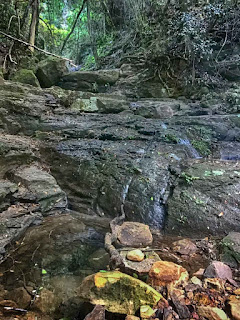 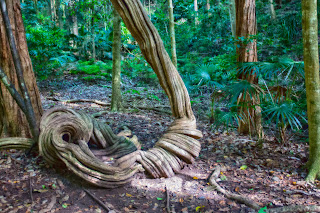 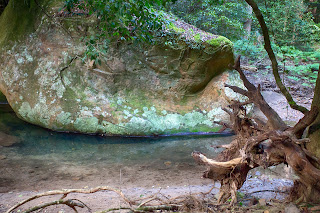 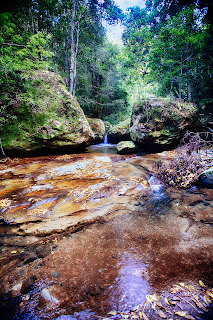 Clover Hill Road provides access to the Falls Walking Track in the Macquarie Pass National Park. There are small cascades along the Road, and the Track gives high views of the Macquarie Rivulet until it meets the creek at Rainbow Falls. Upstream there are a series of other waterfalls.

Rocks near the fall are slippery and some are fragile. Exercise extreme care. 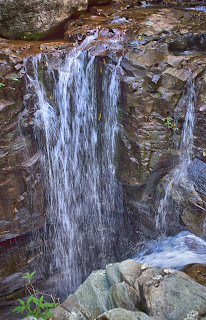 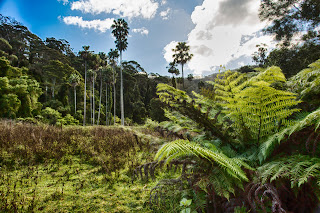 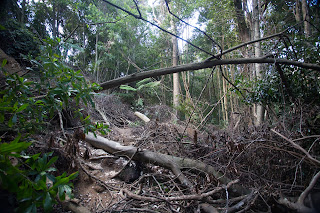 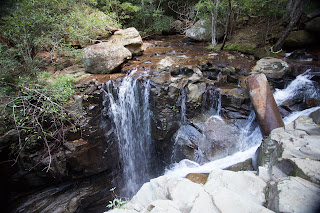 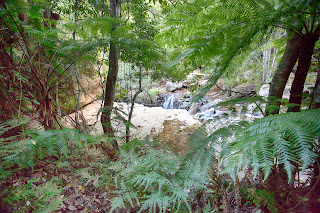 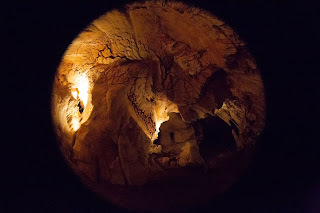 The Karst area has a couple of featured waterfalls, including the larger Wombeyan Falls and the smaller falls of the Mares Forest Canyon. 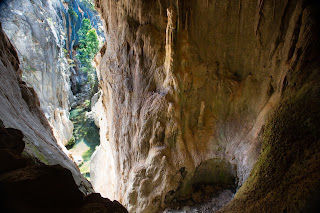 The canyon is worth careful examination. It is a wet limestone canyon normally full of small waterfalls. It is a fun, swimable, wild place. The canyon extends a long way, with high marble walls, and many (natural) faces and figures. 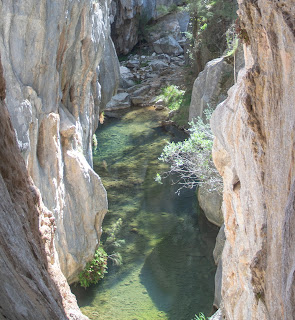 Even in drought, there remain pools of water in the canyon: crystal clear, deceptively deep and cold. Mares Forest has large deposits of water sculpted marble, creating strange shapes that radiate from every direction. Along the canyon floor, nature has carved a hundred statutes. Here, my eye picked out the distant shape of buildings, and a serpentine eye/mouth. A courtier with peaked hat and waistcoat. A mother and child. A pickpocket at work in a crowded street. All around the shavings from a chisel and blocks yet to be carved :)

In winter and early spring, it is best to look at the cold water from a distance. Here the vantage point is the Tinted Cave, itself carved by an underground waterfall.

The limestone - and marble - walls of the canyon are breathtaking (second only to the brown snakes) - and the water has to be seen to be believed. It is a nice place but is a bit tricky to get to (and you need waterproof cameras inside the canyon). 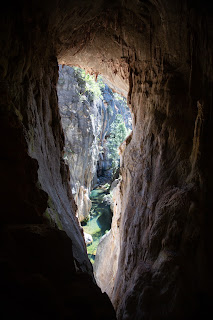 The road from Sydney to Wombeyan is probably one of the most dangerous tracks in the country, and best left to goats. The road in from Taralga is sort of ok. Still, the views along the canyon are worth the effort and this (and the dry canyon at Wollemi) is probably a good experience for anyone thinking of doing a bit of canyoning. And most of the waterfalls are human-sized.

Here is a slightly distorted, color enhancement of the deep shadow in the original scene. It shows what might be a 'step' of a waterfall inside the limestone cave. It is dry at present, but the the shape of the cut into the limestone (bottom right) is similar to those found under active falls (in this case, perhaps, originating from a chute in the ceiling of the cave).

Note: Ok, not everyone will find this a fun canyon to swim. A wet suit and river shoes are recommended. There are three long cold pools to traverse and lots of rocks to climb over. You will encounter poisonous snakes. Let me leave you in the care of one of the larger 'white' dragons 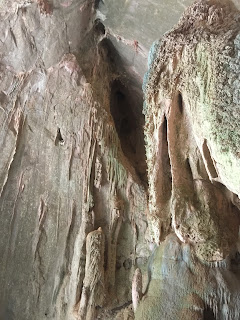 This rainfall river hosts many small and a couple of large plunges. 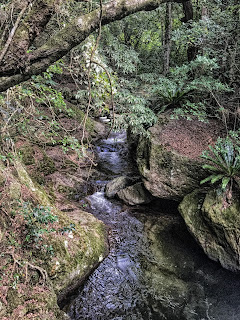 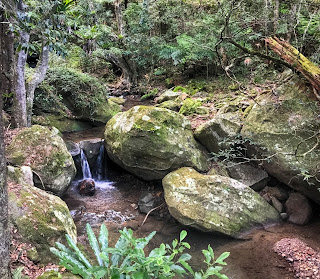 Perhaps this was once known as the Meme Mora by the First People ("the river of many fish", today anglicized as Minnamurra). 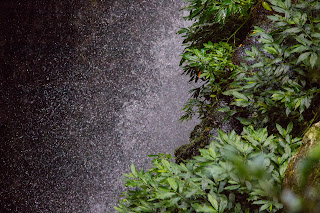 This 100m (300') fall is in the upper reaches of the Meme Mora . It is part of a series of drops that end in a plunge into a deep slot canyon. The path to the falls is pretty, and passes a couple of small plunges including Lyrebird Falls.


This is not vain marketing, i saw a number of the birds along the track. 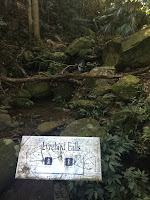 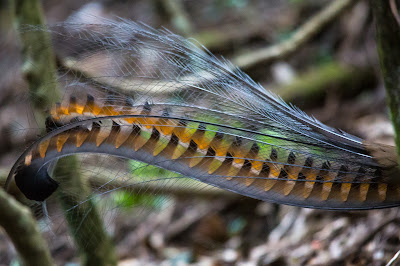 The first people valued feathers from birds and assigned them symbolic and ceremonial importance. Old bushmen also valued these, wearing a "gift" in their bush hat for bush dances and, then, when they left for war.

It was a different time. Practical clothing were made at home. Three changes of clothing was thought profligate. Pride of place in a home was around a piano, and in the cool drawing rooms that housed that wonderful piece of furniture, sat small reminders of the land: carved emu eggs; a book of bush poems; vases of dried native flowers and a display of feathers (sometimes still attached to formal hats, of both men and women). These were placed well out of reach of inquisitive children and only worn on formal occasions: a trip to the races; a bush dance; a baptism; a wedding or a funeral.

Not every feather is a gift. Instead a gift is a happenstance. It is a feather left on a path by a bird: an emu; a bush turkey; a rosella; a cockatoo; or, most rare of all, a lyrebird.  A feather taken from a dead bird can never be a gift.

A gift gains value and import according to how many times it is given. From friend to friend. From parent to child. The story of a gift and its re-giving is often told.

A gift can not be bought nor sold.

I imagine that these plants must get pounded by the water from time to time - but still, they looked so luxuriant 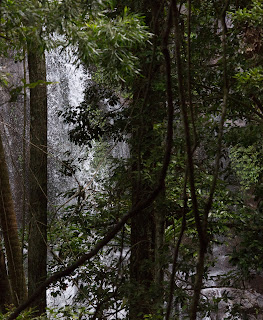 These images gave rise to the following conversation:

Monique Helfrich This mist of droplets looks as a poem, one of yours...
Peter: In trying to comprehend a new waterfall, i am often overwhelmed as i sit, trying to understand. I find it restful to focus on a single aspect of the complexity, to rest the mind and begin to see the beauty of the whole. Sometimes it is a single fern in the midst of chaos, or a boulder or a shaft of light. Or sometimes it is a single drop, falling.
Monique: Peter Quinton I understand that, having often the same feeling. And some other times, I need only to feel I'm a part of the whole...
Peter: Do i 'see' a waterfall, or is my mind constructing a complex dynamic model of it. In the natural world it is one of a handful of natural object of this type (to a degree, any moving water triggers a lesser response). Perhaps, the mind does not just visually identify the waterfall, it seems to commit resources to predicting the flow, speed and risks associated with the fall. When i leave a fall i have studied, i often do not have a 'snapshot' of it in my mind.  Instead, for a moment, my mind became the waterfall :)
Monique: Peter Quinton what means "to see"? Thing can be place front my eyes, their shapes can reach my retina, I see them only if I'm attentive, il I want to see them, if they matter for me. I did know people (young and old) able to walk in the mid of a splendid landscape, to be before a gorgeous sunset/sunrise, a great painting ...  without seing them ! Their brain was concerned elsewhere besides. And, "beside", it's perhaps not given to all people to become, for a short time, a droplet , a tree, a bee :-))
Peter:  if we can become a droplet of water for a moment, perhaps the droplet can become a Monique or a Peter as well :) I did not see the world around me until recently, because i was obsessed with my legal career. How pointless that now all seems :)

The hike to Rainbow Falls will take a couple of hours. It is possible to ride a push bike along the access track.