The Macquarie (Wiradjuri "Wambool", the Meandering River), ends life as a long placid outback river, that travels far out west before disappearing into the Macquarie Marshes past Warren. It is one of the last unconquered rivers - no one has yet paddled its length. 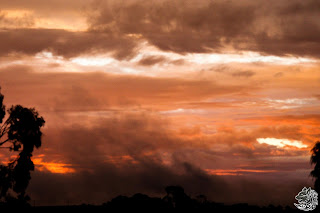 It is sometimes easy to forget that this river takes form in highlands with falls, although the bushmen and women of the outback will often exclaim in surprise at the sight of a hill, for they are inclined to call any shallow run in the river across a bed of rocks "a fall".

The upper path of the river disappears from the map; at Lake Oberon the river changes name to the Fish River, and the upper water is impounded and turned over to the use of the water rich people of Sydney. 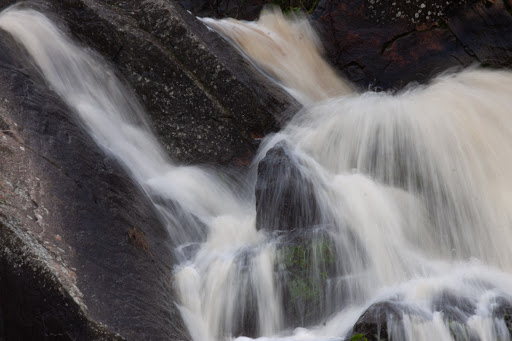 Today, the waters of the Fish River are impounded by Lake Oberon, which diverts water to a number of settlements and industrial purposes, including the Sydney Water Supply. 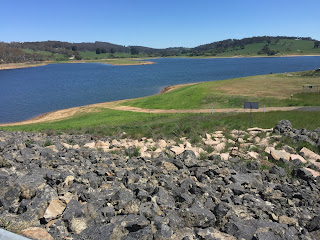 Deep erosion gullies can be found eating into granite soils on the southern side of the Fish River. In rain, these spawn mud falls, which cut bizarre forms into the surrounding landscapes. On the Bosworth Falls road, look for The Kings Docks (a reference to the Irish patriot O'Connell's political manifesto) and King George Gully. 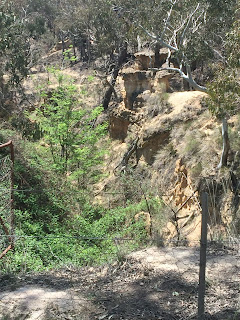 To the west of the ranges, it was practice in Colonial times to name safe crossings of rivers and streams as 'falls'. Many of these features have now disappeared from contemporary maps, although, confusingly, many road names still have references to the ford. Such is the case with Bosworth Falls and, perhaps, the nearby Mutton Falls. 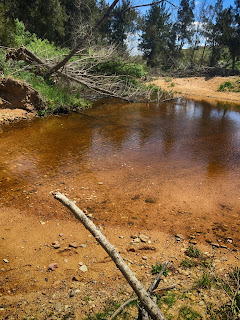 I started the day searching for Bosworth Falls, which elderly residents confidently identified as a natural ford. This ford is across the Fish River near a scatter of buildings called O'Connell a little distance to the frigid town of Oberon. This Australian 'fall' took its name from the village of Saint Boswells (Cille Bhoisil) in the Scottish Borders. Saint Boswells was the teacher of the famed St Cuthbert and a fan of salt spas. You will have seen pictures of the commons of Saint Boswells where the annual gypsy fair for the trade of horses is held.

Like its peers, the ford near O'Connell has been forgotten by map-makers. In these days of bridges, no one needs to know where fords are anymore, even splendid examples of a sandy ford such as Boswells Falls. While i would have had no trouble, like the gypsies of Cille Bhoisil, riding through the ford on Scout (my palomino) driving through in my truck seemed a much riskier proposition. Still, while forgotten, the ford has a call for fame. At a node of ancient paths, this was a place of ceremonies for the First People, who maintained a grove of trees with ceremonial carvings near it. The trees, alas, are long gone, although part of the carvings from one is preserved at the Bathurst Museum. 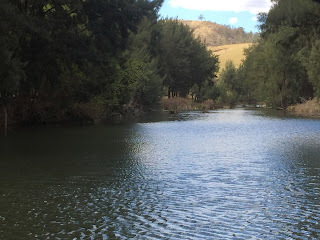 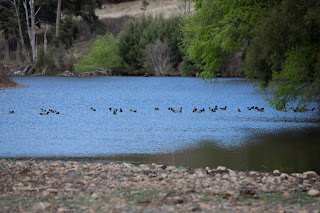 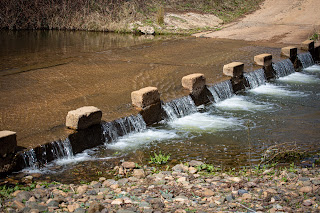 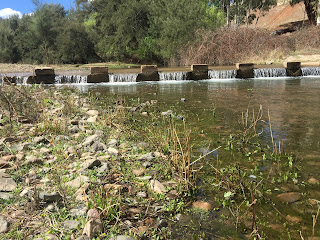 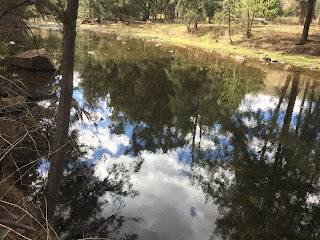 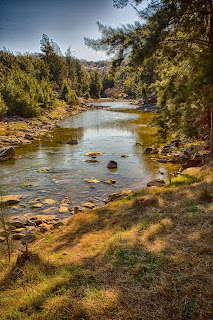 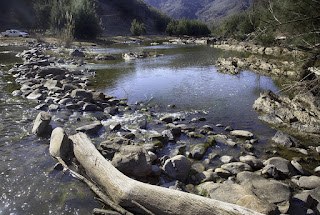 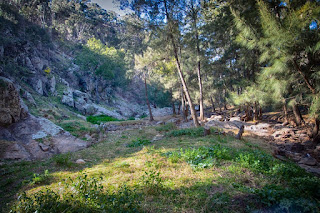 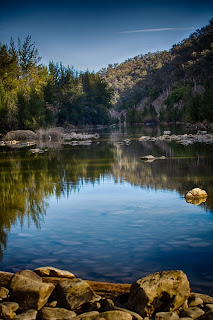 An old bloke at Bathurst told me about the Forge of the Gods.

He hadn’t seen it: as a young man he had heard the story from an ancient prospector in a pub at Sofala. A fall on the river so violent that it cut a deep ravine and then gouged a great hall into the cliff-side, and filled it with the sound of smithy hammers and the glint of fool’s gold.

The young man had remembered the story and looked for the fall as time permitted. But, now he was old and bent. He said he had seen many wondrous things while looking and had no regrets.

But i could see a strange look in his eyes so offered to bring him a picture of the falls.

He looked at me and stifled a chuckle. Then he mumbled not to do it on his account.

I did some research. The tourist guys and rangers could tell me about olive farms, wineries, shops and public roads, but shook their heads when i asked about falls. The tourist folk, helpfully consulted wider and came back with a smile to tell me there were no falls in the region. My abseiling friends from Sydney don’t come out this far (too flat, they say). So, i buckled down and started to search the major rivers (Fish, Turon and Macquarie) from the escarpment falls to the flat water on the Macquarie River.

After some false leads, in the Turon badlands i met a kayaker. She was catching the last water of a snow melt, but going was getting tough, and the water was dropping to the point where she was dragging her boat across rocks between the high pools. I helped drive her and her kit back to her pickup, and on the way she told me of a couple of dangerous falls further down stream (kayakers call all falls dangerous, even the little ones).

Kayakers and I do not often meet: by the time they start bothering the river, the waterfalls i seek are usually just a memory; instead the river is shooting through chutes and down gravel races. Fun, but, well, i don’t have a good track record with kayak expeditions.

She told me of a place, past Sofala, deep in a ravine, where a couple of big falls lurked. Dangerous places: meat stoppers, she said. Kayakers dragged their boats up the cliffs on the side of the river to port around the area. (When she said ‘meat stopper’ i didn’t need to ask what she meant.)

So, here i am now, at Killongbutta. Nearby is a private road called Forge Road (so much for my early research - roads called "Fall" or "Waterfall" are a bit of a giveaway). Still, Killongbutta is an ominous name of uncertain origin, one of those words like ‘meat stopper’ that don’t need further explanation. Not having a kayak, i feel reasonably safe from the meat stoppers, although there are packs of dingos in the area.

By process of elimination, if it exists (even if on a more modest form than the old prospector made claim), i am now within striking distance of the Forge. I have seen many wondrous things searching for the Forge. Perhaps the search for this speck of fools gold on the basis of a pub yarn decades before across a couple 100 kms of river will have been more exciting than the target (i am also a bit fitter and a lot browner as a result).

The great meandering river has many secrets. This is the home of the Wiradjuri, a proud people who fought the English invaders to a peace treaty. Here, next to the lost* Nanima Falls outside Wellington, some of the first people ended in “displacement, dispossession and social isolation”. 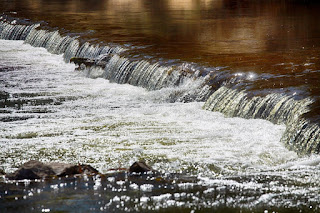 I came in search of one of them: Sir Watkin Wynne, the Wiradjiri NSW mounted policeman who helped capture the murderous Clarke Brothers and forestall a Fenian rebellion in the colony. He died here: an old man respected throughout the colony, partner in a successful gold mining enterprise, and aloof of any notion of social class. In the nearby town of Hill End, he famously rebuked those around him for their treatment of the poor and disabled, black or white.

Here beside this lost fall, in the waters of the Wambool, i found no answers. But it is comforting that, for a moment, today, i stand in his footsteps.

(* Like a number of falls, Nanima Falls has been removed from the maps and historical records Australian history. I have been remembering Wynne in my short story cycle “The Long Tailor”)

Summer Creek
The city of Orange is close to a number of large falls, but they are associated with another catchment. However, there are a number of pretty falls to be found along Summer Hill Creek.
The Falls 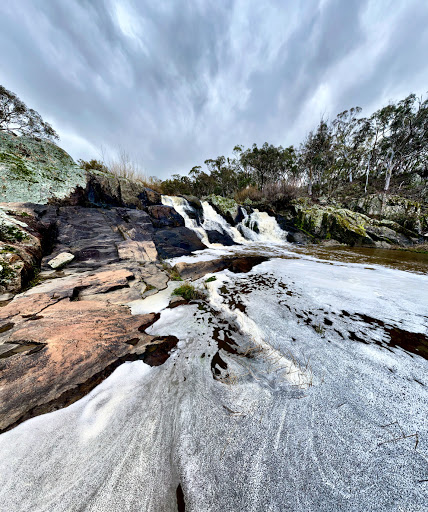 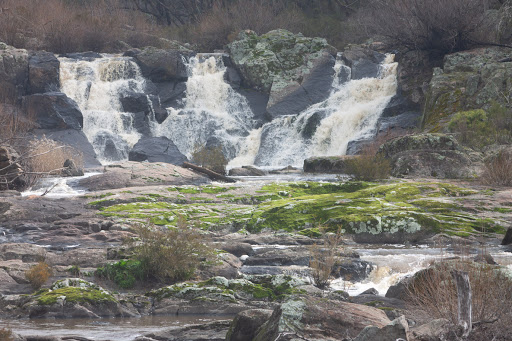 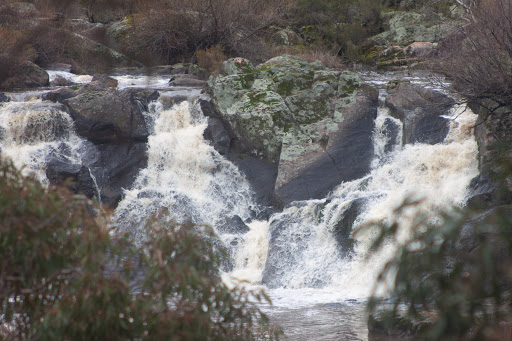 Back to Australian waterfalls and cascades page 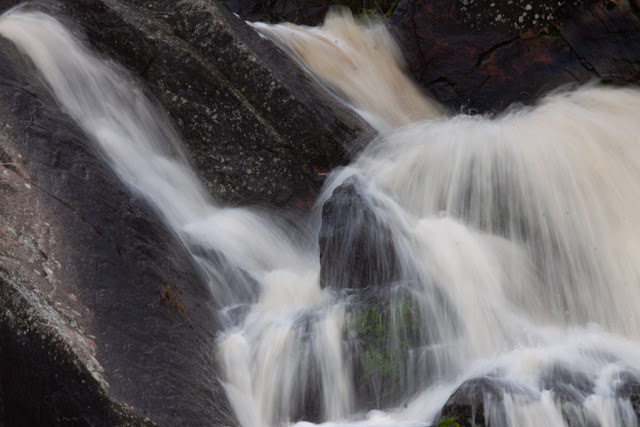