I have spent the last couple of weeks in 1538 reconstructing the Port of Scarborough from a view/chart prepared for Henry VIII . It has been a bit of faint relief from an intense study in cinematography. In that time I have become quite fond of the town and its churches - two long gone and one changed beyond recognition, and the 150+ houses and farm buildings inside the walls.
Having completed this part of the puzzle, I am ready to push back further to 1264 to start filming a story that has been taking shape for a couple of months. Sadly, I will have to leave a couple of the churches (St Sepulcher and St Thomas) behind.
The King's Highway will take you from the West Gate to the great medieval city of York, which early gave Scarborough artisans and the trades that once combined to build walls, moats, churches and ordinary homes. At this time the main street in town was called Long West Gate.

Sitting near the West Gate is the 4 tiered tower of St Thomas which was associated with a nearby hospital.

Beyond St Thomas were the inward looking monasteries that were just about to be broken up by Henry VIII.

In the center of town was the five tiered tower of St Sepulcher which, like St Thomas had one southern aisle. 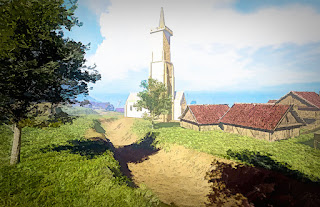 At this time, St Marys boasted three pyramids on its towers, a north and south aisle. It was eventually to include a great choir beyond the central tower and a second north aisle. I have not included either of the additions as I am taking this church back to 1265 with me. 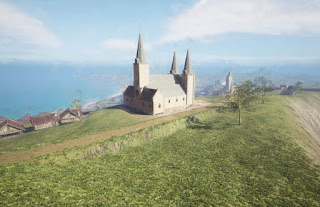 Beyond the church, battlements led to the Keep. The churches and the castle enjoyed an uneasy relationship - eventually leading to ruin of all.

Scarborough Port has changed beyond recognition - in 1538 it had a free standing pier and nearby crane facilities. Here a herring boat head out to sea. 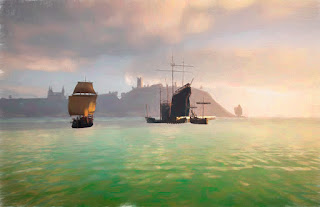 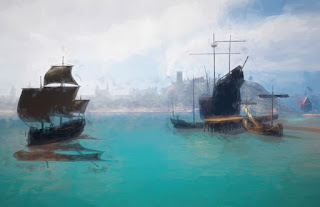 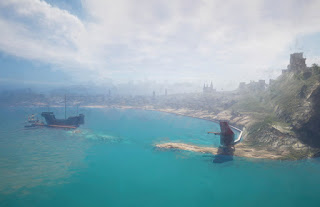 Perhaps we will find the fair on the beach back in 1265. 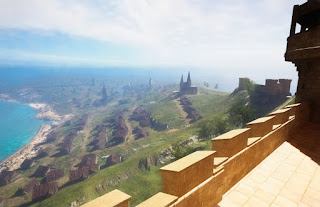 The town, buildings and port were constructed in Unreal Engine 5.0. I will publish video of the town as in 1538 later this year.
Labels: Cinematography Media Models Novel