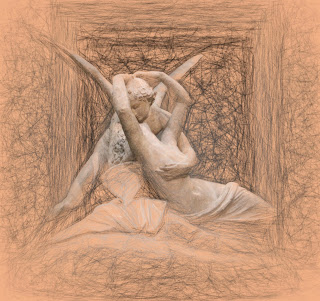 In my dreams
I feel another’s breath on me
unbidden, once more
Soft and warm and raw
Just before dawn
in the dying time
When the colors drain
from Manhattan’s veins
And only the howls of the few
Risk her cold avenues
For, while I dream
She is awake
That city that will not dream

When a traveler first enters the Lost City, she often remarks on the complexity of the place and the intricacy of its buildings. Nothing is intuitive. To turn right, you must first turn left. You must put aside your conception of ‘city,’ and ‘town’ and ‘village,’ and forget other cities you have experienced.

Most cities are like books. Despite their differences in content and appearance, cities and books are all constructed with materials of substance. While books are built with hardcovers, end sheets, paste, paper, and ink, the essence of cities is in concrete and metals, glass and fiber. Ordinary cities, like books, vary one from the other by size color social cohesion ethnic, political and cultural differences. There are small differences between the materials used. The ink used on one page can be a little different to that used on the next.
In the Lost City you find none of the material characteristics of ordinary cities or books.
Instead, those who have built the Lost City have used energy: electrons vibrating with transient frequencies.
After a week, the traveler begins to see a pattern within the complexity of the City.
The nine bridges of the City separate the four outer quadrants from the central area and the single exit.
Diamonds and gold litter the streets but have no natural value.
Amidst the crystal spires of light, residents illuminate the great city towers all hours of the day and night. All things, good and evil, appear possible. The risks deter none. All the peoples of the world have been pouring into the Lost City for years through cracks in the interspaces of new technology, and as they enter the city limits, they gladly swap all their material possessions for transient value.
After two weeks, the traveler starts to see poverty among the riches.
The art of the City is derivative with a sameness that does not inspire.
In the slave markets, you can pick up a man here or a woman there.
The City excludes no drug nor body modification, so the young roam City parks at night in monstrous carapaces, clicking claws and flashing fangs, only to reshape themselves when they awake in late-morning.
No excess is too extreme or narrow. Everything is permitted; no community banned. No belief is not enthusiastically catered for and promoted. On the thoroughfares and in the areas, violence and peace are random and commonplace.
Despite the violence, no police patrol the streets; no librarians guard knowledge, no teachers instill the will to learn. Those favored by the moment take justice by force and guile.
After a month, the traveler starts to notice that owners often abandon stately homes before they are complete. The City rebuilds ghettos as areas of incredible wealth within days. Sellers of second-hand oil lamps become millionaires even as you watch them trying to trade their wares.
Children starve and waste before your eyes.
It is only then that the traveler begins to understand three important realities about the Lost City.
Firstly, the city is living on borrowed time. Like all modern human technology, it risks destruction by a thousand possibilities: from a random flux in a solar flare, or some new technological innovation. It may be destroyed tomorrow or maybe in 50 years’ time. On the day before destruction, when all might be saved, the City occupants will argue about who should act but will end up taking no action. On the day the city fractures or burns, its occupants will not remember how to repair the city. At first, they will sit in the ruins until they come to understand that there is no one left to save them. Then, those still able will walk away with nothing.
Secondly, despite being full of people, the city is empty of souls, life, and meaning.
Finally, while the city consumes the wealth of the world, it offers nothing in return. Just the illusion of a city.
Pity the Lost City not; she could save herself if she wished. Switching the lights off and one good long sleep would suffice. Once, when we were younger, she slept deep. Then, her dreams held me in thrall. Amazing deeds were done in her name, fancy art spoken, fine promises whispered. The songs of the world beat in her heart.
She has shut the door on sleep. What dreams await when your veins are awash with the detritus of hundred thousand small things undone?
Series: Ancora Tu, Ancora Io Image: Metro Museum, NYC
Labels: Novel

Peter Quinton said…
Anonymous (explain)
Our love affair with the internet once promised a better world - but has delivered a different, fragile, construct. What will remain when it fails?