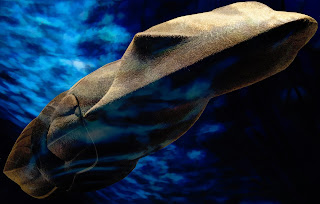 Jules Verne's Twenty Thousand Leagues Under the Sea created a world of amazing possibilities. As a kid (like lots more) i would stay awake at night trying to imagine the amazing Nautilus and playing adventures in my head. Verne's themes were expanded and became the stuff of other books, films and, in living memory, reasonably successful TV series (Seaview and Sea Quest DSV). Off world series have roots back to this genre.

Of all the deep sea submersibles designed to make the illusion real, the organic Sea Quest best fits my memories of Verne's creation. I made the model years ago, but it has sat in my tool shed since, gradually loosing all the fancy bits to adventures with spiders and darker inhabitants of the that realm.

Every so often, i have thought about imaging it, but the photography has been unsatisfactory. One persistent difficulty in photographing models is depth of field. While depth of field is a standard way of tricking the eye about size and distance, focus and blur in mid-ground shot of a model dispels the illusion. This is particularly the case in a big model (this one is about 18" long.

In preparation for shots of the model, in 2014  visited the Australian War Memorial and took shots of a memorial/exhibition of a Japanese submarine taken off the coast of Australia during WWII. 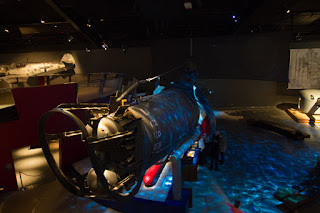 I also spent a couple of hours imaging water patterns in aquaria. Eventually, i selected a couple of shots based on those investigations

However, depth of field beat me at the time and i put the project aside until a couple of bits fell into place. Some newer cameras are coming out with inbuilt depth of field features. I understand that you click the button and a number of shots are taken at slightly different ranges and added together. The results are stunning images - particularly flowers.
I still shoot with a Canon 5D iii which does not have that capacity. However, very recently a friend suggested using the high speed setting to take lots of shots to get complete focus coverage of the entire surface of an object at short range - a model or flower. Here is part of the set i took, hand-held, while manually adjusting the focus.  Turns out that the 5D heats up pretty fast or experiences data blockages, so i had to hold and pause a couple of times. 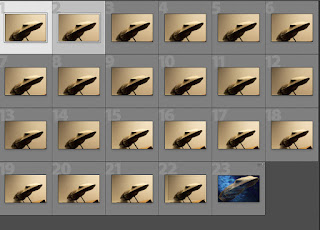 I then imported into Photoshop and Auto-aligned and then Auto-blended the images creating the second last image in the film strip above. It wasn't perfect - but i blame the hand-holding, a good layer of dust and spiders for the imperfections. The final image was manually edited to remove the stand and imperfections then painted to create slight light dapples on the top surface. I then selected the background and added the background and a stretched foreground element.

Peter Quinton said…
Thanks Lefti :)
i would really like to do this with orchids in the field... might have found a work around
Cheers Peter
Thursday, February 18, 2021 at 9:50:00 PM PST 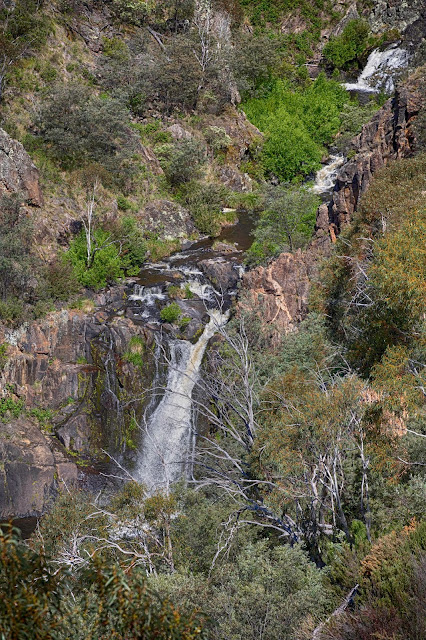