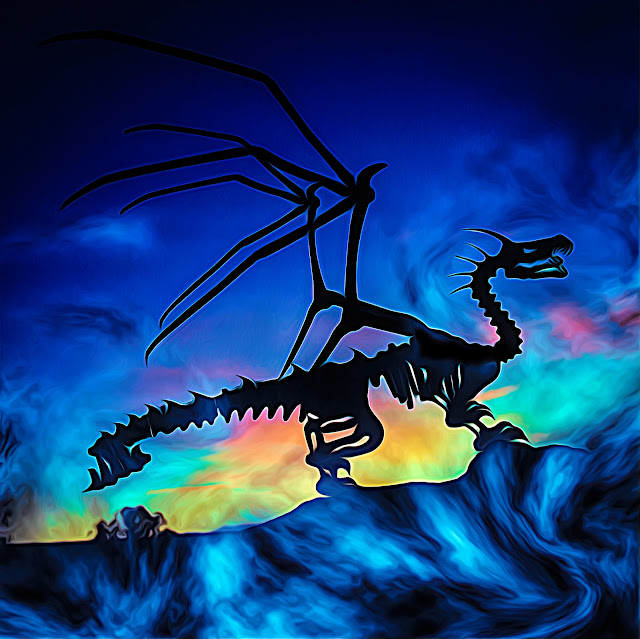 I (Kathy) looked at Storm, playing with the white cat and wondered if she had heard anything I said.

Then I looked at Jon, the biggest mistake I had ever made... and wondered why I had let him back into my house. Again I wondered if I had listened to myself. I would not make that mistake again.

I grimaced, “There is gold everywhere here. The sun was hitting the grass heads, the glint of your eye and the lining of the afternoon clouds.”

He said, “You should come sit on the rocks and watch the sunset.”

I asked, “And where would you be?”

He smiled, “Holding the horses below. You will come too, Storm?”

Storm was distracted playing with the cats.

Storm looked up, “Mum, you still haven’t told him about the dragons.”

I replied, “I do not think he believes in them.”

Jon said, “I see dragons all the time.”

I said, “Some of the old-timers have been telling me stories about them. At first, I thought they were just talking about big monitors, the goannas up on the ranges. But some of the very old folk described seeing them and sometimes talking to them. I disbelieved until one took me up into the Black Range.”

Jon asked, “What did you see?”

“It was late evening. About the time the eagles fly back to their trees. I think I saw two yellow dragons flying fast, at tree level. Apparently, they come out midday and fly into the thunderheads gathering energy.”

Storm glared at him and said pointedly, “I hope they bite you.”

I said, “I am trying to tell you what I have seen.”

Jon smiled, “Does it matter what I think?”

I could feel the wind rising. I felt a chill in my bones as I caught Jon’s eyes.

He did not speak, but I heard his voice, dimly echoing from the past, “Listen! Stop now. Don’t go.”

I paused, broke eye contact and turned to Storm, “The wind is coming up. We should get the clothes in.”

A great weariness overcame me. Jon was too much work. I said, into the walls, “Thanks for the company.”

He was right behind me. He said, “Come, come show me the dragons.”

He said, “I believe you. Now, come prove I was right to follow you blindly.”

Reluctant, I went with him to catch the horses, and we took the old bridle track up into the mountains. His cats escaped from Storm and followed in leaps and bounds. We sat at the top of the lower hills and waited until the mist came and hid the sky. Nothing happened that night, but he arrived every afternoon for the next week, with enthusiasm and chocolate, a pair of field glasses and a pack of cards.

We saw eight sunsets, and I won his farm off him a dozen times before he saw the dragons. He grabbed my shoulder sharply, and we froze still as the cards fell all around us and Blanket turned and hissed. We only saw them for a few seconds, flying at tree level, but it was enough.

He jumped to his feet, resisting the urge to shout, craning his neck to watch where they had disappeared back into the high ridges.

He turned to me, his eyes on fire.

I yelled at him, “Haven’t you been listening to me? The old folk say the dragons have spoken to them and told them we are not to follow them into the mountains.”

It took a while to persuade him, but eventually, we returned to our homes. He stopped coming over, and I gritted my teeth, telling myself I should not have expected anything less.

A couple of weeks later I saw him, excited. He told us of a number of recent close encounters with dragons, including a story about a rainbow, aelfs and almost getting a pot of gold. One of the orange dragons had got there first. He said he was going to search for the lair and that I should come with him. I told him he was insane and would not let him borrow a horse. I ended up red-faced, yelling at him again, but he would not listen.

Eventually, he shrugged and set off on foot with only his cats for company.

I watched him go. Storm came and put her arms around me. She said, “Come sit around my fire?” laughing shyly. I gnashed my teeth. Then she said in a matter of fact way, “We can’t let him go by himself; the cats might get hurt.”

I gave him some leeway, then Storm, and I followed him tracking up the high ridges and along an overgrown fire trail towards the old arch, a small cave system formed by the creek. We saw him enter the cave system. We paused high on the bluff where we could stay out of sight, not sure of what we could do.

We were waiting a while when we heard sounds from the cave. One moment there was just the creek bed, tree ferns, and a grassy patch next to a lovely little creek. Next, the aelf rainbow hit the grassy patch just outside the cave. There was an explosion of light and a faint rainbow trail extended high into the sky. The mist started to rise.

Jon staggered out of the cave with the cats. He was bleeding from a head wound, blood staining his shirt. Storm tensed and was about to run after the cats. Jon ran a couple of steps towards the rainbow but then fished for his phone.

Storm muttered, “His new girlfriend, I bet. What an idiot.”

A couple of raindrops fell on my arm.

I said, “What girlfriend?”

The smell of a summer storm, static electricity and the rumble of thunder.

Waylander carefully picked up the aelfs, and they all hit the rainbow as the dragon exploded out of the hill.

There was a rumble from the cave behind him. He looked back. I could see he had one eye closed. Then he put his head down and ran for the rainbow. I heard him shout, “You are right. I am going to rethink the whole gold thing.”