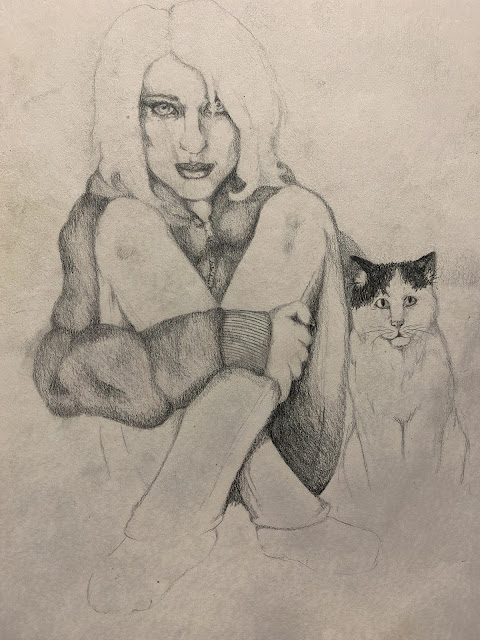 Growl paused. She watched clouds move in front of the moon as she collected the tendrils of stories the humans had told. With a rough New Zealand accent she started:
When she was young, Storm spent a summer collecting and painting fox skulls with traditional designs. The designs were full of color, and each told a different story about the fox. Through painstaking small dots and gradations in color, she recorded where the fox had lived and what it had hunted. She did a good job. Something that would have made her ancestors proud.
Jon said that one day when he returned from riding, he saw one of the painted skulls hanging on the wall of her old stables and asked her where she had found it. Offhandedly, she told him she had made it and showed him some of the other painted skulls, placed around the farm. She explained that the process for making them was difficult. He asked her to show him her process. She told him to come over when he had some time to waste.
Seeing her interest, he came back a day later. She took him up into the forest where she found the carcass of foxes by smell and watching the crows. Then she showed him where she dragged them to an ant nest. Here the ants cleaned the skulls for her.
He was astounded by the range she covered. She was still very young. The young girl had travelled far past his farm, through field inhabited by bulls and kangaroos five times her size. He was also very concerned about her handling the dead foxes. Many would have been killed by poison baiting by farmers, as foxes prey on ewes giving birth and young lambs. But he said that because this was her story, he did not say anything.
Then she took him to her bush studio where she mixed paints from oils (sump oil from one of his sheds) and natural ingredients: ground granites, red earth, gold-flecked quartz, and ash.
Unexpectedly, she handed him a skull she was cleaning for painting. He held it in his hand, marveling at the surface silky smooth.
He asked her how she managed to get the skull so smooth.
Storm looked at him, catching his eye. Levelly she said, “I borrowed your toothbrush and scrubbed the skulls soft.”
Image: Indya

Index & Description of this cycle

This is an extract of a thread within the Dragons Eye series focused on the character Storm
Fox
Eggs
Believe
Rainbows
Salt
Gold
Fire
Copyright Dark Aelf 2020-21
Back to INDEX
Labels: Novel