Mark Twain once traveled from Sydney to Melbourne by train. Along the way he noticed ads for self-righteous brands of “sheepdip”, a medicinal tar shearers apply to cuts on sheep (some may have experienced self-inflicted cuts during lock-down). 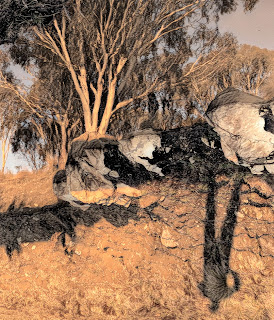 Of “sheepdip”, Twain warned his readers:

This morning, I found the answer to Twain’s question.
Reaching for the jar into which I store ground coffee, i found only dregs left. Having never been that low before, I hesitated. But after I considered all the different single origin coffee that had many times filled the jar, I mused the thought of the aged blend that might result.It is not an experiment worth repeating in the absence of “sheepdip”.
(Image, shadow walking, a puzzle-picture that needs 3 coffees to solve)