The mid reaches of the Belubula River flows through rough country, largely unseen. The river itself is one of the main tributaries of the inland Lachlan River. The explorer Oxley complained that the Lachlan was deprived of decent tributaries that might boost its flow, but like the Lachlan itself, the Belubula lacks a deep wet catchment. The Lachlan is destined to empty into the desert marshes on all but exceptional floods.

The mid- section of the Belubula River (75kms dropping 600m from Carcoar Dam to Canowindra) is dominated by pool-riffle sequences. About 4kms from Bakers Shaft Reserve, the river drops through a series of narrow gorges and a series of small falls and rapids. 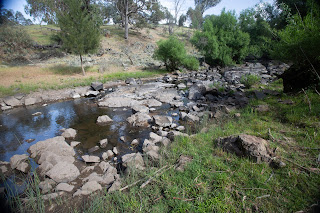 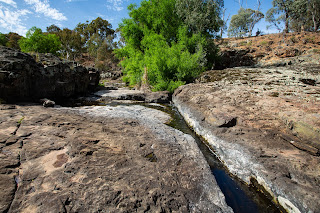 While the river valley is used for grazing and crops, the river is fringed by Sheoaks and Red Gums. Remnant White Box and Kurrajongs can be seen on the ridges with Yellow Box, Blakely’s Red Gum and Apple Box on lower slopes (Brainwood, Applied Ecology P/L and Orange Speleological Society). Introduced willows and figs can be found in the river as well. 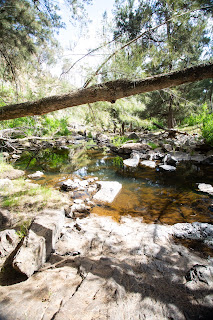 I recently followed the river down an indistinct path downstream from Bakers Shaft Reserve (if Blackberries have not been kept in check, the way would have been painfully slow) with the Central West Bushwalking Club and my sister. The path will take you back and forwards across the river a number of times. 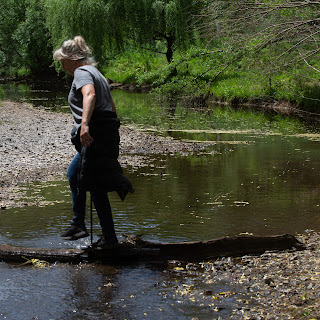 About 4km from the Reserve, an abandoned weir sits atop a narrow gorge and a pretty waterfall. After flooding rain, the view of the archaic ruined arches and the cascading falls is reminiscent of the the elvish city of Rivendell - a strange juxtaposition of ruins and flowing water. However, there are no elves here. The abandoned weir once provided water through rusting pipes for a hydro-electric scheme which supplied power to Junction Reef gold mine. The Belubula is surrounded on all sides by mining - one tributary, the Cadiangullong, runs through the massive Cadia mining operation on the north slopes of Mount Canobolas.

Below the weir is the Belabula Falls. The present course of the falls may be higher and displaced from the original site of the falls.

Today the modest water flows on the river are impounded at Carcoar Dam and released to meet irrigation needs downstream. Accordingly, the flow down the falls is dependent on water releases from Carcoar Dam (most likely during growing seasons) or heavy local rain. These images were captured after a thunderstorm, but, unless the abandoned weir is already topped up, the falls by the side of weir may not flow. 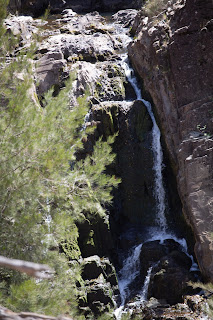 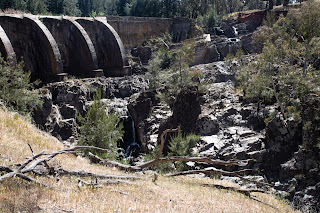 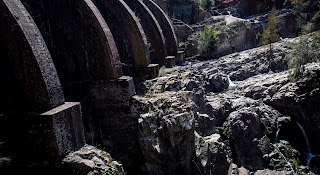 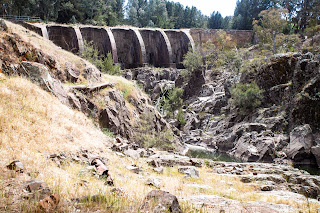 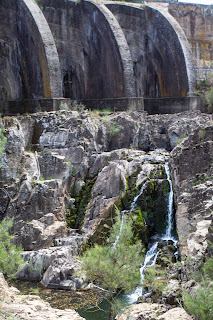 Downstream of the weir the creek moves through deep gorges, including the Needles and Crankies Rock. While in decent flow this might provide an exciting trip, this section will need to be ported to avoid the falls.

In this part of the river is the Cliefden Caves system, a stunning series of limestone caves that offer a view into the distant past. Brocx, Semeniuk and Percival (Department of Science & Engineering, Murdoch University) conclude that the area is "...a rare example of volcanic island biota, including some of the most scientifically valuable (and in several cases, unique) fossils in Australia. At least 191 genera and 263 species of fossils have been described from the Cliefden area with some 45 genera and 101 species unique to this region." 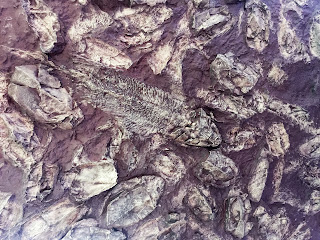 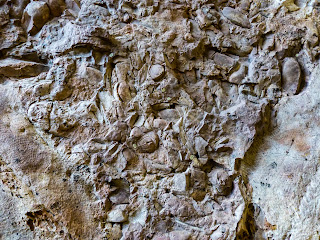 Near the caves, an important contributor to flow in the river is a thermal spring that adds about 400mega litres pa at 30 degrees Celsius to the river.

Turtles, snakes, birds (Friar birds were fishing) and frogs are evident, and platypus are regularly seen. 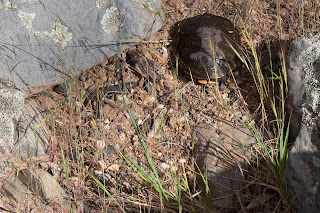 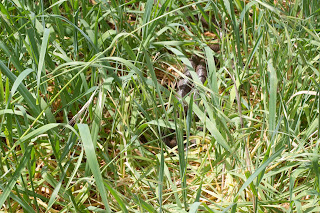 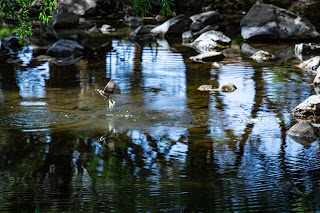 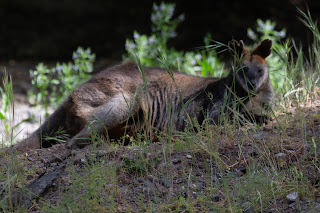 Near the little (unpronounceable) town of Canowindra (dont try saying it), the River settles down, and offers long stretches of kayaking from different points. Outside the town can be found the Canomodine Reserve (the Cadomine Creek is a another Canobolas tributary of the Belubula) protecting a grassy white box woodland (an endangered habitat), while the town itself provides a museum of the Devonian fish fossils and a 19th century streetscape. 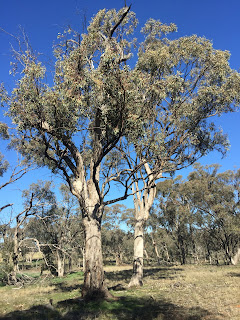 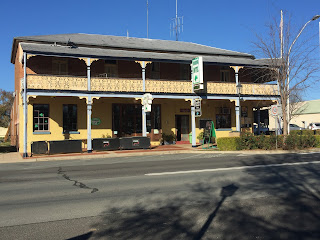 The little town of Canowindra has also become a hub for balloons, despite being surrounded by barb wire fences. Sadly, the balloon and the barb wire fence are natural enemies in the wild. 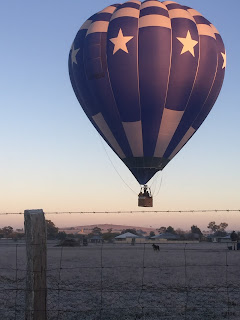 Bakers Shaft: Locality Map
I have added the walking trail, the dam and weir to OpenStreetMap (the track is in small dots, hugging the river) Press 'View Larger Map".
The walking trail connects the Belubula Falls with the Bakers Shaft Reserve Car Park.

Spinkled said…
Isn't that trekking through other peoples properties?
Was special permission gained?
How long did it take you?
Monday, November 30, 2020 at 3:51:00 AM PST

Peter Quinton said…
Hi Spinkled
The creek and a considerable amount of land either side of the creek are public land. Private holdings are clearly marked off by boundary fences. Below the falls is a zone reserved for a gold mining operation, and access into this area may need permission (the area below has a massive hot water spring and the rock strata have huge deposits of fossils from ancient lake beds).
Along most Australian water-ways, the crown has reserved the stream or river and about 5m of riverbank for the public. On old goldfields, the reservation can be considerably larger. Private owners are often times unaware of the extent of these public spaces. In lots of cases, fallen trees or undergrowth make public access impossible.
In addition to riparian reservation, many places with water features, such as falls, cascades, deep pools or billabongs, and larger areas suitable for public gatherings or overnight stays were reserved specifically for public uses as town commons or floral or nature reserves a century ago. Some of these have disappeared through the corrupt actions of local officials ( a series of criminal and civil investigations are presently underway into these), but in the main they still exist, along with large swathes of public land reserved for travelling stock.
Bakers Shaft Reserve and the associated public land has elements of all of these reserve categories. Note that there is no easy way to access the falls save along the creek. It would not, for example, be proper (or safe depending on the stock being run) to jump a private fence and walk to the falls.
Thanks for your query
Peter
Saturday, December 5, 2020 at 3:13:00 PM PST

Spinkled said…
Thank you for your response Peter.
I am very interested In the hot springs and the fossils and also the caves.
I have spent hours doing research to find the location of the springs and finally stumbled on your blog which has had the beat info so far on the location.
Did you stumble up on any caves? I do know many of the caves are on private property and have figured out which property, but know most caves are managed by an external organisation.
Its good to know that I am able to walk along and explore the river from bakers shaft. Im sorry if my query seemed abrupt, I was very surprised to stumble upon your walking blog of the river.
There are some interesting rocks in the belubula river, I have a small collection, beautiful conglomerates and perfect black basalt plus others.
Thank you for all the information 😊
Saturday, December 5, 2020 at 4:20:00 PM PST

Spinkled said…
P.S. I would never jump a fence. Hence my surprise at your lovely walk along the river. I assumed there was mo access other than Bakers Shaft.
Saturday, December 5, 2020 at 4:22:00 PM PST

Peter Quinton said…
Hi Spinkled
All good mate, abrupt gets to the point quickly :)
I did my initial walk here with the Central West Bushwalking Club (CWBC) as far as the falls - which i would rate very highly because of the associated abandoned arched dam wall - it is absolutely spectacular. I have since come back a couple of times and would recommend the walk in late autumn or early spring, perhaps when the water is not flowing hard. The walk down the river involves a bit of bush bashing and some creek crossing - and we did disturb large snakes.
The presence of the hot springs and the rock forms reminded me of Yarrangobilly so i would expect the area to be full of caves - although it may be that the gold workings have collapsed obvious entry points.
Interestingly, atop the rise nearest the falls, someone has thoughtfully erected a small gazebo - and a road from the reserve appears to travel to it. I am not sure whether the road travels over private property. There is a gate over the road but each time i have been there it has been open with not signage about entry.
I have not seen the hot springs (but understand the water output to be significant) nor seen a report of the composition of any natural contaminants (which in other places range from beneficial through to outright dangerous).
You are no doubt aware that a sample of the fossil bed slabs can be seen at the Age of the Fishes Museum at Canowindra. I understand that a great many slabs were unearthed, but then reburied on site pending a much larger facility for safe storage and study being constructed. This seems a bit unlikely, and there is talk around nearby towns that a blind eye has since been turned at quarries and road workings to similar discoveries.
The downstream gorge looks very interesting and i understand that the CWBC might be considering a future hike down the stream.
I am unsure whether the extant gold mine lease might extend some sort of statutory prohibition over the entry of the riparian crown land below the falls. A further complication arises because there has been lobbying on behalf of downstream farmers to dam the gorge. Such an action could destroy or damage the fossil bed (and certainly deny access to it), and is likely to pinch the hot springs shut, perhaps significantly reducing water gains to the downstream river from that source. This might make requests for entry across private land difficult for political reasons.
Jumping a fence is perhaps the subject for another time :) but a lifetime ago i had to research the Australian law on this as a part of rewriting the old Common Law and fragmentary statutory law on the subject. The law recognises that people sometimes end up on other people's property (sometimes for very good, innocent, reasons). In those circumstances, absent damage or illegal use (stealing a sheep), a landowner is merely entitled to the name and address of the 'trespasser' and the person leaving the land. A landowner that threatens such a person commits a serious offence. A landowner that asserts a right to land which right does not exist will find themselves in serious hot water very quickly. Over the years hunting waterfalls i have come across the occasional surprised owner, all of whom have been quite reasonable, and a couple who have become good friends.